Our body starts acting weird when it gets a dose of anxiety attack.

An increasing number of human population is suffering from severe, chronic anxiety. It’s human nature to get anxious about things every now and then.

You can’t deny that you have also been anxious under a lot of circumstances. Then you might have experienced one or more of the bodily symptoms when anxiety stricken. It really feels overwhelming when things go out of control.

People often experience anxiety attacks, which may occur multiple times a day having a serious impact on their lives.

People always had an anxiety issue, that’s nothing new. But our modern social media dominated lifestyles are making it even worse.

Many of us might confuse panic attack and an anxiety attack, which aren’t the same thing. A panic attack will normally occur extremely speedily and will be very acute, but normally won’t last for long, if properly dealt. Although an anxiety attack may share some of the same symptoms, it will be less acute and devitalizing, but will probably last longer.

Once we’re aware that we suffer from anxiety, we can easily pick up on these attacks. An anxiety attack can exhibit itself in a variety of ways, some of which you might expect and others which might have never occurred to you.

A lot of these are linked to our natural fight or flight mode that the body goes into when we’re stressed and the adrenaline rush will prepare us to deal with a potentially dangerous situation.

However, if someone suffers from anxiety, their fight or flight system may not be working properly.

Here are 10 things your body does when you’re experiencing anxiety attacks :

These two are contradictory symptoms of an anxiety attack. We do not have the same reactions as every one of us is different and so is our body which reacts differently under stress.

With the onset of an anxiety attack, we might either find the blood draining out of the face completely, which can be associated with a state of shock or find that it rushes onto our face, as if one is embarrassed or have been exercising for a long time.

These two signs indicate changes in the body’s circulation i.e. if you grow white, then your body is actually ensuring that the blood is concentrated around your vital organs (which is very necessary), whereas if you turn red, the body is trying to bring down its raised temperature.

Along with the changes in the outer appearance, the body heat can shoot up or fall while undergoing such attacks.

So if you find yourself getting hot and it feels like having a fever, that’s because of blood that is being pumped quickly around the body. This sudden rise in temperature will result in sweating, which will cool down the body and you will start feeling chilled.

This is one point that anyone who’s ever been nervous will be able to connect with, but individuals who suffer from anxiety are more likely to observe that they feel the need to urinate more often when they’re encountering an attack.

The experts are not completely sure about why this happens, but they think that it might be because the bladder is essentially a muscular sack and when you’re anxious your muscles all tense up and so does the bladder; making the urge to urinate severe.

Some people natural tendency fidget more than others anyway, but one may find themselves fidgeting more during an anxiety attack without being aware that they’re doing it.

This might include tapping your pen, your feet or constantly fiddling with a glass or whatever else you’re holding.

The adrenaline pumping around your body will make you feel quite high on energy levels than you might be having normally.

This won’t be let you sit down for long or settle to anything. The sympathetic nervous system will control all the processes then and you will feel aroused and uneasy because of that.

6. Lack of concentration or focus:

In the clutches of attack it becomes next to impossible for the brain to concentrate on anything else apart from the reason that is causing one to feel anxious.

Unfortunately, you won’t be able to focus on a task and even if you try hard it will all go in vain.

This is yet another one that could go either way depending on the person in context.

If a person’s sex drive is in general fairly consistent, then it could either go to low creating a crater when you’re feeling anxious or might suddenly go on the top of the roof.

Whichever way it goes for anyone, it’s all linked to the hormones raging around in the system when he/she is anxious.

Most of us are accustomed with stress headaches, but headaches can also occur due to anxiety attacks; which is a very common feature.

People who suffer from anxiety attacks regularly are quite prone to chronic headaches or migraines.

This can become a vicious circle, when you start believing that your anxiety-induced headache is actually a symptom of a serious illness (that is not true), which leads to more anxiety and so a worse headache resulting in a never ending cycle which continues with the same zeal.

Anxiety driven headaches can be a result of tightness in the back and neck muscles, which can worsen up by consuming unhealthy food and following poor sleep routines.

9. Increase or Loss of Appetite:

Most of the people suffering from anxiety are likely to have no appetite at all when they’re experiencing an attack. They may feel nauseous at the very idea and sight of food and would try to vomit if they eat even a scanty amount of food.

This happens because anxiety leads the brain to secrete hormones called adrenaline/epinephrine that activates the fight or flight response. During such a situation, the body is of course going to prioritize immediate survival over food.

On the other hand, there are few exceptional people who over eat because of stress; their bodies crave for extra sugary or salty foods.

However, the general rule is that the more severe anxiety, the less likely you are to find comfort in food.

People who suffer from anxiety might feel like they are unable to swallow and their mouth feels dried up when they encounter an attack.

Mouth dries up because of the fact that when suffering an anxiety attack we tend to forget to drink water and being dehydrated can elevate severe anxiety symptoms.

When we’re anxious, we tend to react in the extremes; either ignoring the signs that our body gives away or by becoming ultra-sensitive about them. This means that our mouths actually aren’t much drier than normal; it’s just that our senses are heightened.

Unfortunately those who suffer from these, take their charge on the whole body in surprising ways.

If your anxiety is severe and is hampering your life, you needn’t suffer alone. Help is always available and you should discuss it with your health professional who will be able to point you in the right direction.

Everything can get under control if you come forward and seek assistance. There are many effective psychotherapies which can essentially reduce anxiety and help us cope with stress. 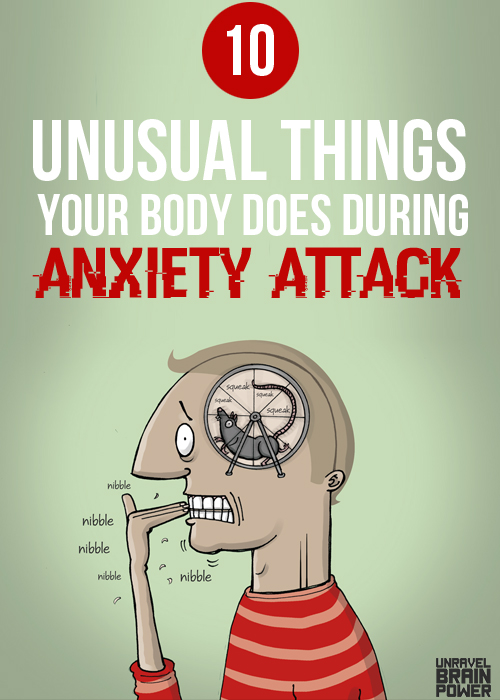