Most of us have dealt with parents controlling our lives or at least trying to take control of our lives at some point in time. Some parents hold the belief to the utmost extent that they are the only beings in the universe who know what’s best for their kids and take all possible steps to control their children’s lives in all sorts of ways and steer them in the “right direction” (read: the direction they want).  There’s a clear distinction between a parent being rigid or strict and outright controlling.

According to Esther Boykin, MFT, a marriage and family therapist, controlling parents are those who, simply, “don’t leave space for their children to have their own emotional experience and develop a sense of autonomy.”

Over controlling, parents can have significantly detrimental effects on their children. What essentially happens in the case of an overbearing mother/father is that their children do not have the necessary emotional growth needed to develop and flourish as an individual. This article provides much-needed tips and insights on how to deal with controlling and overbearing parents, be it a controlling mother, a controlling father, or both.

6 signs a person has controlling parents:

1. Their parents are constantly trying to control and dominate them:

In case their parents are downright authoritative with the life choices they make and constantly interfere in their daily life and activities they regularly engage in, they are, in fact, controlling. This goes on like a very normal activity even years after they reach adulthood. They simply refuse to let go of the control they have on their child, fearing they will lose the opportunity to dominate them. Why do parents develop traits as such? Chances are, they This will undoubtedly hamper their emotional growth in several ways and they are unable to develop a sense of being autonomous in their own life.

Controlling parents simply refuse to give their children the space that is necessary for their growth. They don’t believe in their child’s right to privacy, nor do they try to understand the meaning of healthy personal boundaries. Boundaries become a necessity once the children reach a certain age. However, these parents outright refuse to give their children the much-needed space and might even show displeasure or annoyance if the child expresses their need for space. They will end up stalking their child and their activities on social media in the name of supervising, which is clearly not the sign of healthy parenting.

3. The parents act as mediators or communicators on behalf of their children:

This is the case where the parents subconsciously believe that they have complete say and authority over the careers and personal lives of their children, and even take decisions on their behalf. They will take decisions for their children, without even asking for their suggestions. Controlling parents in adulthood can lead to severe anxiety in social situations. This is owing to the lack of confidence and at times even the trauma and depression that comes with the inability to make decisions for themselves at times. It can make a person feel inadequate and not worthy enough for the life that they truly deserve.

4. They will provide for their children but with certain terms and conditions:

The parents, in this case, will always remind you that they are providing for you and therefore, you are obligated to provide all of your attention, love and time to them – they act as if they have complete monopoly over you. An example of a controlling father-daughter relationship is one in which the father buys branded garments, expensive apparel, and the latest trending gadgets for his daughter but all these purchases come with certain conditions applied.

The daughter has to be a puppet in front of the father, to be controlled by him at all times, goes to the educational institution he approves of and gets the degree of his choice.

5. They often guilt-trip and blame their children for their own issues:

A controlling parent shows traits of being overbearing and often is cunning and manipulative in their ways of dealing with their children. These people often use negative tactics to scare their children away and use strategies for manipulating them.  They can emotionally blackmail their children continuously, guilt trip them for events that happened in the past and shame them for their past mistakes or actions. Very often, it might be the case that they have faced similar behavior from their parents or elder ones which have led them to become this person. If you find either or both of your parents exhibiting traits as such, beware. Chances are they might be toxic and manipulative in ways you don’t realize.

6. They have unrealistic expectations from their children:

Imagine carrying around the heavy burden of such parental expectations on a continual basis. They will set up unreasonable rules and timings to be strictly followed. And the children often are forced to be subservient to these parents, for they know very well the repercussions that might occur if they slightly disobey their parents. They will make their children constantly question themselves, which undoubtedly hampers their self-confidence a great deal.

7. Treating their children as inferior and dependent beings:

Often instances of parents are found infantilizing their children and treating them as less mature than they actually are, putting up constant reminders of the ways in which they are dependent on their parents. They may even humiliate their children in public when they refuse to comply or agree with them. The child is not considered to be an independent human being because of a subtle fear in the parent’s mind that the more self-reliant, independent, and mature the child becomes, the more they will drift away from them.

They mock and belittle their children, and provide them very little scope to defend themselves. Insulting or putting down their children in front of others might even boost their false sense of pride and ego. This is their own distorted worldview, to victimize their own children and derive pleasure from these.

How to deal with controlling parents?

1. Change yourself through self-empowerment:

The first step would be to bring about a solid change in oneself and one’s attitude and approach towards people and problems in their life. Maturation usually comes after reaching the early years of post adulthood (being a young adult). Only after you bring about certain much-needed changes in yourself you can attempt to actually take these problems head-on. You can for starters, approach your parents on some of the obvious and some of the not so subtle ways they try to take control in your life and try to poke their nose in almost everything insignificant.

This approach has to be a reasonable and clear-headed one. You cannot expect anything if you become hot-headed and lose your temper while conversing with them about the matter. Be gentle in your approach towards them and explain clearly and concisely why you want to take your own decisions and why it’s not okay for them to take decisions on your behalf.

2. Stop trying to please your parents:

“We feel stuck in a rut, unable to say ‘no’ to our parents, unable to put an end to their controlling behavior, unable to grab hold of our own lives, simply because we fear that we will hurt, insult, disrespect or disappoint our parents (entire families).”
― Lukasz Laniecki, You Have The Right Not To Make Your Parents Proud. A Book Of Quotes

It is a quite natural inclination on your part to seek approval, love, or validation from your parents, however, if they show traits as mentioned above, chances are that they will put themselves before you and focus on taking care of their own needs first. While there is a subtle fear that works within all of us – we most certainly don’t want to disappoint our parents and become the cause of their hurt, sadness, or despair in any manner whatsoever.

This way, we are doing more harm to ourselves than good and also giving our parents the impression that we are hungry for their approval for all actions and decisions of ours and that they can control our lives in all ways possible.

3. Don’t say certain things or take certain steps in a fit of rage:

Keep in mind, they are your parents after all. They are on your side, they are not your enemies. Don’t sour your relationship with them and break the bonding that you share by saying hurtful things in a rush of momentary anger. Have control over your emotions, learn to take control if you haven’t already. Choose your words, and take your decisions wisely.

4. Accept the way they are, and focus more on yourself:

Your parents are old enough, they are mature enough and it is quite unlikely that they will be able to change themselves, change their nature or how they behave with you. Bringing about a stark change in personality is literally impossible at such an age. What will save you here is focusing more on your own development, your own growth, and how you gradually make yourself come out of your parent’s shadows and build a strong personality for yourself.

5. Seek help from a professional:

Consult a family psychologist whose methodical approach might actually help in making things transparent between you and your parents. Seeking help from a medical professional will certainly bring about definitive positive changes in your lives, as well as the dynamic that you share.

Overall, a complete assessment of the relationship that you share with your parents and preparing for the conversation you want to have with them beforehand will help greatly in bringing about a change in the relationship. A positive development is expected out of the efforts that you put into situations like this. 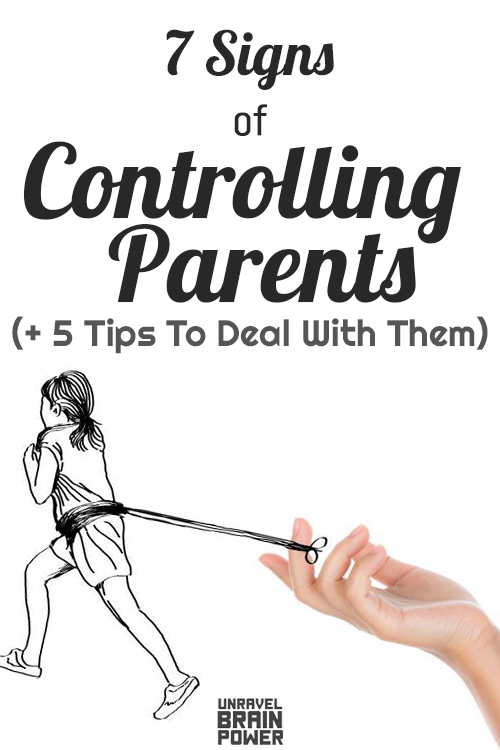