An introvert isn’t a shy person, they are just the “more focused” ones.
They may not open up to you just immediately but will get to you, once they are comfortable around you.

We have listed down the most famous introverts of all time who have not only changed their lives, but also did turn ours too. Their thoughts and works have given us chances to rethink ourselves, the way we think, and how the world be benefitted us.

Not because they are successful, but because they have left such big impacts on us, we remember them. They have and they are inspiring us in every sphere of our life.

The famous and successful Introverts of all time

1. Albert Einstein: The genius of all time says,

“The monotony and solitude of a quiet life stimulate the creative mind.”

The most modern man is known to date. He received the Nobel Prize in Physics in 1921. was a German-born theoretical physicist, who developed the theory of relativity, one of the two pillars of modern physics. His work is also known for its influence on the philosophy of science. He believed in being introverted and his inventions have shaken the world from time to time.

“I don’t dream at night, I dream at day, I dream all day; I’m dreaming for a living.”

One of the most popular, successful, and influential American filmmakers, producers, and screenwriters was an introvert. His notable works include films such as Close Encounters of the Third Kind, Raiders of the Lost Ark and, E.T. the Extra-Terrestrial and Jurassic Park, and many more.

“I think introverts can do quite well, If you’re clever you can learn to get the benefits of being an introvert.”

The founder of Microsoft at a very early age believed that introverts can do work better because they have a better focus on things.
Bill Gates is a technologist, business leader, and philanthropist. He grew up in Seattle, Washington, with an astounding and supportive family who inspired his interest in computers at an early age.

Emma Watson is best known for playing the character of Hermione Granger, one of Harry Potter’s best friends in the ‘Harry Potter’ film franchise. The British actor was appointed UN Women Goodwill Ambassador in July 2014. The completed actor, benefactor, and current graduate of Brown University will devote her efforts towards the empowerment of young women and will serve as an advocate for UN Women’s HeForShe campaign in encouraging gender equality.

“If I have done the public any service, it is due to my patient thought”.

He was a physicist and mathematician, who was the culminating figure of the Scientific Revolution of the 17th century. In optics, his invention of the structure of white light united the phenomena of colors into the science of light and laid the infrastructure for modern physical optics. In mechanics, his three laws of motion, the basic principles of modern physics, followed in the formulation of the law of universal gravitation.

He received the Nobel Prize in 2009 for his exceptional endeavors to strengthen global tact and harmony between peoples. He was the first African American president of the United States.

“No one can make you feel inferior without your consent.”

“When something is important enough, you do it even if the odds are not in your favor.”

His inspirational quotes are enough to motivate anyone like you and me.
He is operating to transform transportation both on Earth, through electric car maker Tesla – and in space, via rocket producer SpaceX.

“People think I’m confident but I’m quite shy and insecure,” she told The Daily Star.

“I never want to talk to anyone at the big celebrity functions because I don’t know anyone and I’m shy and get awkward. I like my real friends around me so that’s why wearing the meat dress was so great because it stunk and no one wanted to talk to me.”

“I’m much more of an introvert [than my mother]. I’m much more inclined to want to not say anything in public. When I have to be in the spotlight, I think to myself, I could do it. It’s a good thing, to imagine yourself doing something you think you can’t.”

The question isn’t, ‘What do we want to know about people?’, It’s, ‘What do people want to tell about themselves?

Being an introvert, he opened up ways for other introverts to discover and share their thoughts worldwide. Remarkable thought indeed!

“I had been writing almost continuously since the age of 6 but I had never been so excited about an idea before. To my immense frustration, I didn’t have a pen that worked, and I was too shy to ask anybody if I could borrow one.”

13. Abraham Lincoln: The best Orator of all time says,

“I’m a success today because I had a friend who believed in me and I didn’t have the heart to let him down.”

Abraham Lincoln was an American statesman and lawyer who served as the 16th president of the United States. Lincoln led the country through its greatest ethical, legal, and governmental entanglement in the American Civil War.

14. Rosa Parks: The US first lady of Civil Rights quotes,

“I have learned over the years that when one’s mind is made up, this diminishes fear; knowing what must be done does away with fear.”

Rosa Louise McCauley Parks was an American activist in the civil rights movement best acknowledged for her central role in the Montgomery bus boycott. The United States Congress has called her “the first lady of civil rights” and “the mother of the freedom movement”.

15. Hillary Clinton: At her Wellesley commencement in 1969 she said,

“Fear is always with us, but we just don’t have time for it. Not now.”

“If we were motivated by money, we would have sold the company a long time ago and ended up on a beach”

17. Warren Buffett: The 4th most rich person on earth in 2020 have more important things to say about being an introvert. He says,

Mohandas Karamchand Gandhi was an Indian lawyer, anti-colonial nationalist, and administrative ethicist, who employed nonviolent endurance to lead the victorious operations for India’s independence from British rule, and in turn, sparked movements for civil liberties and rights over the world.

“A man who dares to waste one hour has not discovered the value of life.”

Charles Robert Darwin was an English naturalist, geologist, and biologist, best known for his benefactions to the science of development. His statement that all species of life have settled over time from common ancestors is now widely accepted and considered a foundational concept in science.

“Some people want it to happen, some wish it would happen, others make it happen.”

Michael Jeffrey Jordan, also known by his initials MJ, is an American former professional basketball player who is the principal heir of the Charlotte Hornets of the National Basketball Association.

“Why change? Everyone has his style. When you have found it, you should stick to it.”

Audrey Hepburn was a British actor and philanthropist. Known as a film and style icon, she was ranked by the American Film Institute as the third-greatest female screen legend in Golden Age Hollywood and was included in the International Best Dressed List Hall of Fame.

“I’m an introvert at heart… And show business – even though I’ve loved it so much – has always been hard for me.”

He was an American singer, actor, and television host. He was one of the most famous Western actors of his time. Known as the “King of the Cowboys”, he performed in over 100 films and various radio and television episodes of The Roy Rogers Show.

“I used to get my money at the end of the week, buy my mum something, or buy a record, and that was it.”

Sir Elton Hercules John is an English artist, lyricist, piano player, and writer. Working together with lyricist Bernie Taupin since 1967 on in excess of 30 collections, John has sold in excess of 300 million records, making him extraordinary compared to other selling music craftsmen.

“Beauty fades! I just turned 29, so I probably don’t have that many good years left in me.”

Gwyneth Kate Paltrow is an American actress, entrepreneur, and author. She has won numerous accolades for her work, including an Academy Award, a Golden Globe Award, and a Primetime Emmy Award.

“I don’t get angry very often. I lose my temper rarely. And when I do, there’s always a legitimate cause. Normally I have a great lightness of being. I take things in a very happy, amused way.”

She is an American actor and producer. She placed herself as a foremost lady in Hollywood after being in the limelight of the romantic comedy film Pretty Woman, which grossed $464 million globally. She has won three Golden Globe Awards, from eight nominations, and has been nominated for four Academy Awards for outstanding performance.

26. Tom Hanks: One of the most respected and popular Hollywood actors says.

“If it wasn’t hard, everyone would do it. It’s the hard that makes it great.”

Thomas Jeffrey Hanks is an American-Greek actor and filmmaker. Distinguished for both his comedic and climactic performances, Hanks is one of the most popular and renowned movie stars worldwide, and is considered an American cultural figure.

27. Kim Kardashian: The fashion icon for youngsters. One of the most widely acclaimed fashion icons says,

“The perfect date for me would be staying at home, making a big picnic in bed, eating Wotsits and cookies while watching cable TV”

So as you see, there’s nothing to be embarrassed about being an introvert.
Do not pressurize yourself on being an extrovert.

Introverts can conquer the world without uttering a word. 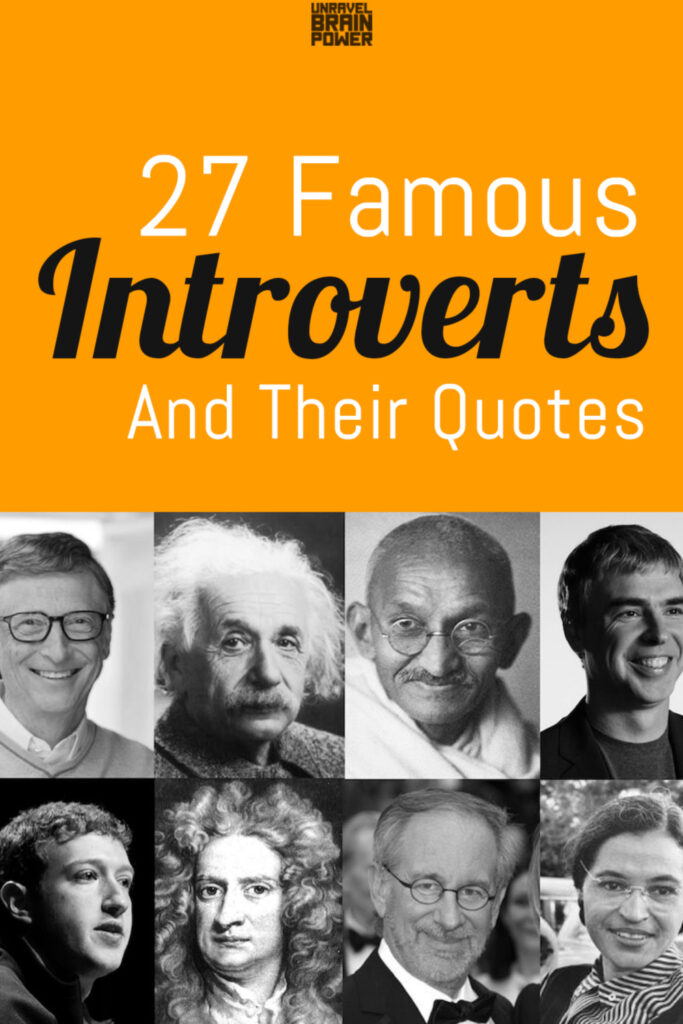