Some of us seek revenge and some are strong believers or karma. In this article, we have collected some powerful quotes about karma that will make you smile and shift your mindset.

Here are the best Karma Quotes

1. This is your karma. You do not understand now, but you will understand later. — H. Raven Rose

2. Live a good and honorable life. Then, when you are older, you can look back and enjoy it a second time. — Dalai Lama

3. When someone has a strong intuitive connection, Buddhism suggests that it’s because of karma, some past connection. — Richard Gere

4. It is impossible to build one’s own happiness on the unhappiness of others. This perspective is at the heart of Buddhist teachings. —Daisaku Ikeda

5. The universe does not carry debts. It always returns back to you what you gave it. ― Drishti Bablani

6. Men are not punished for their sins but by them. — Kin Hubbard

7. Realize that everything connects to everything else. — Leonardo da Vinci

8. But this was what happened when you didn’t want to visit and confront the past: The past starts visiting and confronting you. — Bret Easton Ellis

9. There are the waves, and there is the wind, seen and unseen forces. Everyone has these same elements in their lives, the seen and unseen, karma and free will. — Kuan Yin

10. Every action of our lives touches on some chord that will vibrate in eternity. — Edwin Hubbell Chapin

12. When you plant a seed of love, it is you that blossoms. — Ma Jaya Sati Bhagavati

13. When you truly understand karma, then you realize you are responsible for everything in your life. — Keanu Reeves

14. Before you act, you have freedom, but after you act, the effect of that action will follow you whether you want it to or not. That is the law of karma. — Paramahansa Yogananda

15. There’s a natural law of karma that vindictive people, who go out of their way to hurt others, will end up broke and alone. — Sylvester Stallone

17. People pay for what they do, and, still more, for what they have allowed themselves to become. And they pay for it simply: by the lives they lead. — James Baldwin

18. Even chance meetings … are the result of karma. …things in life are fated by our previous lives. That even in the smallest events there’s no such thing as coincidence. — Haruki Murakami

19. The love you send into the world, you will find, is the love that returns to you. ― Avina Celeste

21. Everyone gets dumped, and everyone gets hurt, and there’s karma to love in regards to what you’ve done to other people. — Marina and the Diamonds

22. When the karma of a relationship is done, only love remains. Let go. It’s safe. — Elizabeth Gilbert

23. Your believing or not believing in karma has no effect on its existence, nor on its consequences to you. Just as a refusal to believe in the ocean would not prevent you from drowning. — F. Paul Wilson

24. Most times, how you treat your children is how they grow up to treat you. — Terry Mark

26. Even death is not to be feared by one who has lived wisely. — Buddha

27. Don’t waste time on revenge. The people who hurt you will eventually face their own karma.- Author Unknown

29. How people treat you is their karma; how you react is yours. — Wayne Dyer

32. By each crime and every kindness, we birth our future. — David Mitchell

33. If you’re really a mean person, you’re going to come back as a fly and eat poop. — Kurt Cobain

34. There is a wonderful mythical law of nature that the three things we crave most in life—happiness, freedom, and peace of mind—are always attained by giving them to someone else. — Peyton Conway March

35. If your actions were to boomerang back on you instantly, would you still act the same? — Alexandra Katehakis

36. When karma comes back to punch you in the face, I want to be there. Just in case it needs help. — Unknown

37. I try to live with the idea that karma is a very real thing. So I put out what I want to get back.- Megan Fox

38. I want revenge, but I don’t want to screw up my karma. — Susan Colasanti

39. Remember to honor the hand which reached out for you when you needed it, by being that hand to someone else who is struggling. ― Greg Dutilly

40. Still others commit all sorts of evil deeds, claiming karma doesn’t exist. They erroneously maintain that since everything is empty, committing evil isn’t wrong. Such persons fall into a hell of endless darkness with no hope of release. Those who are wise hold no such conception.- Bohidharma

41. You cannot do harm to someone because someone has done harm to you. You will pay just like they will. — Ericka Williams

42. Violence does, in truth, recoil upon the violent, and the schemer falls into the pit which he digs for another. ― Arthur Conan Doyle

43. If you truly loved yourself, you could never hurt another. — Buddha

44. You cannot do a kindness too soon, for you never know how soon it will be too late. — Ralph Waldo Emerson

45. I believe in Karma. If the good is sown, the good is collected. When positive things are made, that returns well.- Yannick Noah

46. Show a little faith in someone when they need it. It’s amazing how it comes back around to you. ― Garon Whited

47. As she has planted, so does she harvest; such is the field of karma.- Sri Guru Granth Sahib

48. That game of consequences to which we all sit down, the hanger-back not least. — Robert Louis Stevenson

49. In the long run, every man will pay the penalty for his own misdeeds. The man who remembers this will be angry with no one, indignant with no one, revile no one, blame no one, offend no one, hate no one. ― Epictetus

50. The meaning of karma is in the intention. The intention behind action is what matters. — The Bhagavad Gita

51. Karma is like a rubber band. You can only stretch it so far before it comes back and smacks you in the face. — Unknown

52. As long as karma exists, the world changes. There will always be karma to be taken care of.- Nina Hagen

53. You might have burned me with your lies, but karma is about to set you on fire. — Unknown

54. If you give a good thing to the world, then over time your karma will be good, and you’ll receive good.- Russell Simmons

55. When you carry out acts of kindness, you get a wonderful feeling inside. It is as though something inside your body responds and says, ‘Yes, this is how I ought to feel.’ — Harold Kushner

56. Karma is justice. It does not reward or punish, because we have to earn all that we receive. — Mary T. Brown

57. Karma moves in two directions. If we act virtuously, the seed we plant will result in happiness. If we act non-virtuously, suffering results. – Saying Lipham

58. I never kill insects. If I see ants or spiders in the room, I pick them up and take them outside. Karma is everything. — Holly Valance

59. Karma comes after everyone eventually. You can’t get away with screwing people over your whole life, I don’t care who you are. What goes around comes around. That’s how it works. Sooner or later the universe will serve you the revenge that you deserve.- Jessica Brody

60. According to the karma of past actions, one’s destiny unfolds, even though everyone wants to be so lucky. – Sri Guru Grant Sahib

Hope you like these Karma and fate quotes. Share with friends and family to remind them of the power of karma. 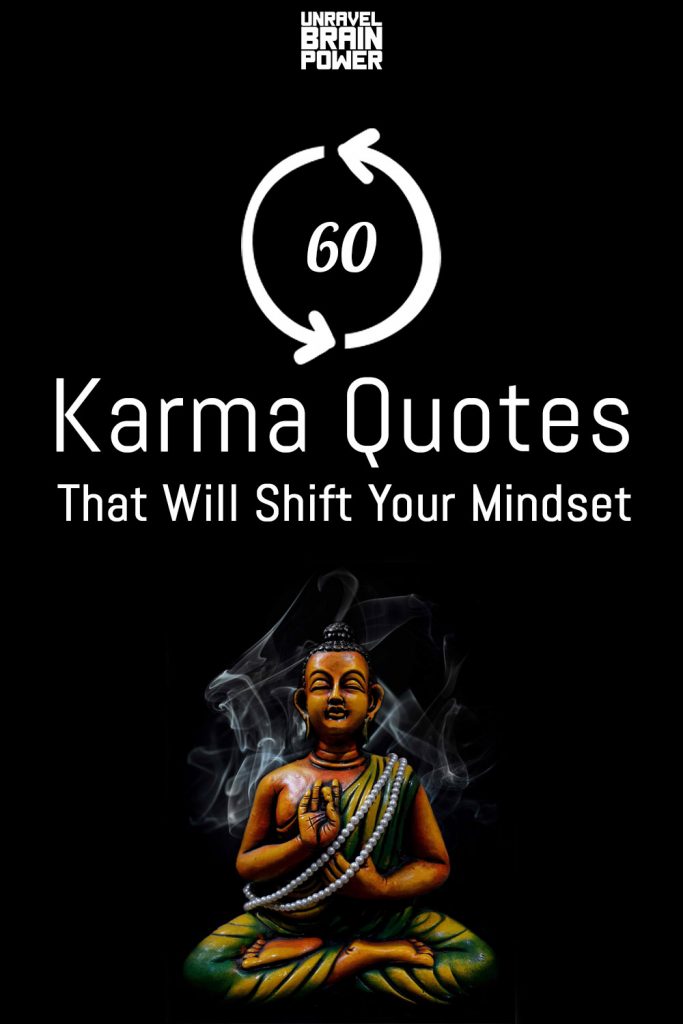