A narcissist uses his masterful sense of language usage as a tool to control and exploit their victims.

Did you ever encounter a narcissist before or fall prey to one?

Narcissists have extraordinary linguistic skills and use words to fool, pressurize, seduce, and misguide others. They have a forked tongue that of a viper and do not compromise when it comes to ranting poisonous, malignant abuse at their prey.

They prefer verbal trickery over anything else to manipulate and are highly talented for uttering the right thing at the right time to confuse and belittle other person.

They love to devalue their victims, purposefully trying to make them feel worthless so that they may crush them to their will. This unstoppable mind game of the narcissist is so incredibly damaging to the people on the other side that it can lead to anxiety, depression and various psychological injuries.

Victims are left wounded with emotional pain that seems to be never ending. People become mentally paralyzed by the assault and do not really understand what is happening around or how to escape from it.

That’s why it is very essential to educate oneself regarding the ruthless language of narcissists; and only then will a person be able to identify it when he/she encounters the same. Knowledge of their ways will help you not only to form a shield against their attacks and but also prepare you for a quick escape.

If you have had already suffered abuse at the hands of a narcissist, a better understanding of how they manipulate might help to recover faster.

So, here’s some of the ways by which a narcissist will exploit language to control his or her target.

This comprises of almost all continual stream of small and insignificant comments that form the foundation of a narcissist’s verbal abuse.

This is how these people usually begin to exert control over their casualty, starting early in the relationship which might just seem like nothing more than a minor flaw in their otherwise charming appearance.

Often you will find them with a friendly smile on their face, saying things like “you’re a very sensitive person by nature aren’t you?” or “no, you just misunderstood what I meant to say.” These are just the initiation of a much longer plan to wear the target down, but they are rarely seen for what they actually are because of their seeming insignificance.

This sort of hidden exploitation will continue throughout a relationship as an accompaniment to a more insidious onslaught later on.

Another thing that narcissists practice particularly at the very beginning of a relationship, is to convince their victim of the unique and special bond they share with the latter. They may use phrases like- “I’ve never felt this kind of love for anyone before, you’re the one” or “what I feel for you is so much more than just love that most people talk about”

This is a form of grooming that gradually begins to sow the seeds for the target’s future tolerance of more injurious maltreatment. They are pacified into a sense that what they start believing that the bond they and their narcissist partner share is unmatched in this world.

Victims start thinking that all the best relationships are explosive and passionate in nature and that this is a sign that their relationship is also very precious. That vulnerable person becomes convinced of this fact and, as a result finds it even more difficult to breakthrough it later on.

3. I Didn’t Mean It Seriously, I Was Just Joking

This is yet another way by which a narcissist will inject their venom into their victims and constantly dismiss insults or criticisms by claiming that they didn’t mean them actually.

They know it fully well in their minds that their prey will have been wounded by the initial comment, so they will make excuses to camouflage their malicious motive. They would say that they were joking, but, in reality they were craftily going on the offensive to navigate themselves into a dominant position. This kind of language further conditions the victim to accept the narcissist’s behavior. It will undoubtedly confuse them as to whether they should be feeling offended or not.

So when the person has zero knowledge as in when to view a comment as an insult and when to take it as a joke will easily hand power over to the narcissist to say whatever he or she likes.

4. Targeting The Victim’s Flaws and Insecurities

A narcissist has a supernatural ability to discover a person’s insecurities and to find out all of the things that the other person considers as faults. They are blessed with brilliant memory for such things and with almost perfect timing when it comes to using them against their victims.

They may even sound blunt in their questioning, using the cover of intimacy and vulnerability to cover up any defenses which might show up while assaulting. Unfortunately here, the victim feels as if this is the way to nurture and strengthens the bond that has so far been built, but alas for the narcissist, it is a way to build up their stores of ammunition for use in the later run.

When the time comes, they will launch an offensive missile using all the information you had once handed over with trust; reopen past wounds and make you feel the same trauma you had been associated with, for all your life.

The narcissist prospers on the power they hold over you and are not afraid to use it in anytime they feel it would advance their cause.

You will mostly find narcissists as nice, charming and even complimentary; well that’s a skill they possess. They can flatter, praise on other people when it suits them, but every single word of the so called ‘praise’ will be dishonest.

Narcissists will use false praises constantly to manipulate others, get them onside and to make the criticisms that follow more appetizing. For instance they might say things like- “I like your dress, but it really doesn’t flatter your figure anyway” as a means of softening the blow while still having a dig.

It might seem to you like honesty, but sorry it is not an honest confession. The compliment is nothing more than a lie – something that they don’t believe, but that serves their purpose.

This is an example of implicit abuse; something that might not always seem so bad to the targeted person and others alike, but acts as a slow poison on the self-esteem of those being targeted.

Narcissists release a barrage of words designed to convince the other person of their wrongdoing and forcibly make them believe that they have done wrong even when they haven’t in reality.

They make accusations such as “you’re paranoid” or “you’re a control freak” to mirror their own ideologies and transplant them into the beliefs of their victims.

They repeat this again and again, with such conviction that the other person ends up thinking that they actually embody these characteristics or that they have actually committed such wrongdoings.

The more a narcissist confuses their victim, the easier it becomes to make them bend to their whims and will. They will set out upon a campaign of trickery and deceit that will slowly make the prey feel that they are losing their mind. The narcissist can effectively write their own script by blurring the other person’s perception of reality and rest assured that it will be accepted as truth.

They will constantly question their victim’s memory and insist them in believing that events were different to what is being recalled so therefore the latter one is the culprit. They will try to withhold information or manipulate the truth to create doubt in the other person’s mind.

The sole motto is to make the victim feel even more dependent on the narcissist so that they do not leave.

This may seem like a small thing, perhaps, but when this scene is repeated over and over again, it can be incredibly disorientating for the targeted vulnerable individual.

8. Singling Out the Victim

A narcissist will insist that they never have any issues with people outside of the relationship just to maintain an air of normality all around and blaming the other person as the culprit for whatever goes wrong in between the two.

They will claim things such as “you’re the only person I face this problem with” or “nobody else ever complained or misunderstood me like you do every time” in order to make the victim believe that they are responsible for everything which goes wrong.

This further weakens the self-belief and self-confidence of that poor person and makes them more vulnerable to future manipulation.

Sometimes the most powerful use of language that a narcissist employs is pursuing a silent approach. During a confrontation, they might simply choose to stare angrily, frown, shake their head or turn away.

Alternatively, they might even try altering the volume of their voice to change the way they get their message across i.e., they may sound louder or quieter as per their wish.

They may also try switching the tone in which they are speaking to convey a different meaning to their words. They may speak slightly higher when on the defensive or put particular emphasis on certain words to push their agenda.

It’s wise to keep in mind that these manipulations of language – and others like them – are designed to exert influence and control over the victim.

A narcissist will adopt whichever approach is suitable to continue their war of debilitation. Try to identify these tactics as this is the very first step to overcoming them and to freeing yourself from the hold a narcissistic abuser. 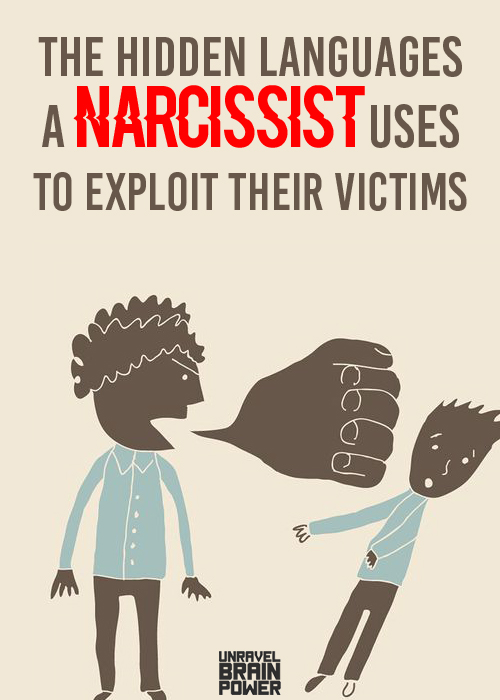