1. Twenty years from now you will be more disappointed by the things that you didn’t do than by the ones you did do. So throw off the bowlines. Sail away from the safe harbor. Catch the trade winds in your sails. Explore. Dream. Discover.
Mark Twain

4. If you hear a voice within you say “you cannot paint,” then by all means paint, and that voice will be silenced.
Vincent Van Gogh

5. Far better it is to dare mighty things, to win glorious triumphs, even though checkered by failure, than to take rank with those poor spirits who neither enjoy much nor suffer much, because they live in the grey twilight that knows not victory nor defeat.
Theodore Roosevelt

7. I am bigger than anything that can happen to me. All these things, sorrow, misfortune, and suffering, are outside my door. I am in the house and I have the key.
Charles Fletcher Lummis

8. Difficulties are meant to rouse, not discourage. The human spirit is to grow strong by conflict.
William Ellery Channing

9. The way I see it, if you want the rainbow, you gotta put up with the rain.
Dolly Parton

10. No pressure, no diamonds.
Mary Case

11. I would rather be a superb meteor, every atom of me in magnificent glow, than a sleepy and permanent planet. The proper function of a man is to live, not to exist.
Jack London

12. Everything you need is already inside. Just do it.
Bill Bowerman (Nike)

13. Get action. Seize the moment. Man was never intended to become an oyster.
Theodore Roosevelt

14. Some people dream of success… while others wake up and work hard at it.
Author Unknown

16. God, grant me the serenity to accept things that I cannot change;
The courage to change the things I can; And the wisdom to know the difference.
Dr. Reinhold Niebuhr

17. You must be the change you wish to see in the world.
Mahatma Gandhi

19. To change one’s life; Start immediately. Do it flamboyantly. No exceptions.
William James

20. Life has no limitations, except the ones you make.
Les Brown

21. There will be sleeping enough in the Grave.
Benjamin Franklin

22. Life is no brief candle to me. It is a sort of splendid torch which I have got a hold of for the moment, and I want to make it burn as brightly as possible before handing it on to future generations.
George Bernard Shaw

23. Life is either daring adventure or nothing.
Helen Keller

24. If you want your life to be a magnificent story, then begin by realizing that you are the author and everyday you have the opportunity to write a new page.
Mark Houlahan

25. Don’t make me walk when I want to fly.
Galina Doyla

26. A pessimist sees only the dark side of the clouds, and mopes; a philosopher sees both sides, and shrugs; an optimist doesn’t see the clouds at all – he’s walking on them.
Leonard Louis Levinson

28. The best is yet to be.
Robert Browning

29. I am here for a purpose and that purpose is to grow into a mountain, not to shrink to a grain of sand. Henceforth will I apply all my efforts to become the highest mountain of all and I will strain my potential until it cries for mercy.
Og Mandino

30. We were born to succeed, not to fail.
Henry David Thoreau

33. Nobody ever drowned in sweat
US Marine saying

34. Gentlemen, we are going to relentlessly chase perfection, knowing full well we will not catch it, because nothing is perfect. But we are going to relentlessly chase it, because in the process we will catch excellence. I am not remotely interested in just being good.
Vince Lombardi (one of the most successful coaches in the history of American football in his first team meeting as Packers coach)

35. Throw your heart over the fence and the rest will follow.
Norman Vincent Peale

36. Believe and act as if it were impossible to fail.
Charles Kettering

37. Obstacles are those frightful things you see when you take your eyes off your goal.
Henry Ford

38. Reach up as far as you can and God will help you reach the rest of the way.
Greg Hickman

39. Never, never, never give up.
Winston Churchill ( In his later years, Winston Churchill was asked to give the commencement address at Oxford University. Following his introduction, he rose, went to the podium, and said the above 5 words. Then he took his seat.)

40. Our greatest glory is not in never failing but in rising up every time we fail.
Ralph Waldo Emerson

41. It’s easy enough to be pleasant, when life flows along like a song, but the man worthwhile is the man with a smile, when everything goes dead wrong.
Author Unknown.

42. Everyday, give yourself a good mental shampoo.
Dr. Sara Jordan

43. Realize that true happiness lies within you.
Lucian

44. When one door of happiness closes, another opens: but often we look so long at the closed door that we do not see the one which has been opened for us.
Helen Keller

46. Birds sing after a storm; why shouldn’t people feel as free to delight in whatever remains to them?
Rose Fitzgerald Kennedy

47. Let me not pray to be sheltered from dangers, but to be fearless in facing them. Let me not beg for the stilling of my pain, but for the heart to conquer it.
Tagore

48. This is what you shall do: Love the earth and sun and the animals, despise riches, give alms to every one that asks, stand up for the stupid and crazy, devote your income and labor to others, hate tyrants, argue not concerning God.
Walt Whitman

49. In the midst of movement and chaos, keep stillness inside of you.
Deepak Chopra

50. If you cannot be a poet, be the poem.
David Carradine

51. Rise above the storm and you will find the sunshine.
Mario Fernandez

52. Don’t wish it were easier, wish you were better.
Jim Rohn

53. Celebrate your success and find humor in your failures. Don’t take yourself so seriously. Loosen up and everyone around you will loosen up. Have fun and always show enthusiasm. When all else fails, put on a costume and sing a silly song.
Sam Walton (founder of Walmart)

54. Keep your face to the sunshine and you can never see the shadow.
Helen Keller

55. Those who wish to sing, always find a song.
Swedish Proverb

56. Be kind, for everyone you meet is fighting a harder battle.
Plato

57. Defeat is simply a signal to press onward.
Helen Keller

59. Rest but never quit. Even the sun has a sinking spell each evening. But it always rises the next morning. At sunrise, every soul is born again.
Author Unknown

60. Don’t hurry, don’t worry. You’re only here for a short visit. So be sure to stop and smell the flowers.
Walter Hagen

61. Love all. Serve all. Help ever. Hurt never.
Author Unknown

62. Meditate. Live purely. Be quiet. Do your work with mastery. Like the moon, come out from behind the clouds! Shine.
Buddha

65. Someday, after we have mastered the winds, the waves, the tides and gravity, we shall harness for God the energies of love. Then, for the second time in the history of the world, man will have discovered fire.
Teilhard de Chardin

67. Waste no tears over the grieves of yesterday.
Euripides

68. The moon lives in the lining of your skin.
Pablo Neruda

69. He who climbs above the cares of this world, and turns his face to his God, has found the sunny side of life.
Spurgeon

72. Success is going from failure to failure without losing your enthusiasm.
Abraham Lincoln

73. Once you make a decision, the universe conspires to make it happen.
Ralph Waldo Emerson

74. Use what talents you possess; The woods would be very silent if no birds sang there except those that sang best.
Henry Van Dyke

75. When love and skill work together, expect a masterpiece.
John Ruskin

76. Obstacles cannot crush me. Every obstacle yields to stern resolve. He who is fixed to a star does not change his mind.
Leonardo Da Vinci

77. You must not only aim right, but draw the bow with all your might.
Henry David Thoreau

78. Only those who dare to fail greatly can ever achieve greatly.
Robert F. Kennedy

79. So long as there is breath in me, that long will I persist. For now I know one of the greatest principles of success; If I persist long enough I will win.
Og Mandino

81. The world has the habit of making room for the man whose words and actions show that he knows where he is going.
Napoleon Hill

82. We must embrace pain and burn it as fuel for our journey.
Kenji Miyazawa

84. Where the willingness is great, the difficulties cannot be great.
Machiavelli

85. Remember the storm is a good opportunity for the pine and the cypress to show their strength and their stability.
Ho Chi Minh

86. In the midst of winter, I found there was, within me, an invincible summer.
Albert Camus

87. When defeat comes, accept it as a signal that your plans are not sound, rebuild those plans, and set sail once more toward your coveted goal.
Napoleon Hill

88. In the middle of a difficulty lies opportunity.
Albert Einstein

89. God never sends us more than we can handle.
Mother Theresa

90. When you come to a roadblock, take a detour.
Mary Kay Ash

91. Promise yourself to be so strong that nothing can disturb your peace of mind.
Christian Larson

93. The things that hurt us teach us.
Author Unknown

95. The oyster turns into pearl the sand which annoys it.
Sidney Newton Bremer

98. Even if you’re on the right track, you’ll get run over if you just sit there.
Will Rogers

99. If you have built castles in the air, your work need not be lost; that is where they should be. Now put the foundations under them.
Henry David Thoreau

100. A year from now you may wish you had started today.
Karen Lamb 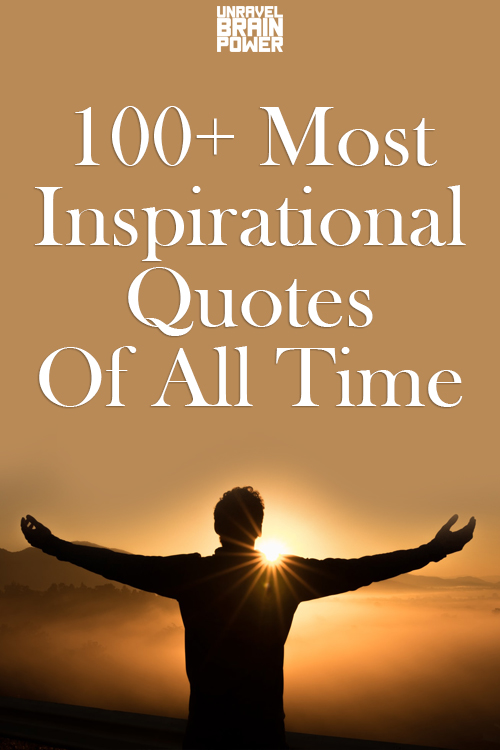