It is really up to us to find our innate freedom no matter how the society we live in. We all should know the importance of self-expression. When we discover ourselves in the process, we learn to acknowledge the very factors that highlight our individuality.

Here are the top 29 society quotes that will help you in finding your individuality.

1. Society exists only as a mental concept; in the real world there are only individuals.
– Oscar Wilde

2. If society fits you comfortably enough, you call it freedom.
– Robert Frost

4. Society does not consist of individuals, but expresses the sum of interrelations, the relations within which these individuals stand.
– Karl Marx

5. The first principle of a free society is an untrammeled flow of words in an open forum.
– Adlai Stevenson

6. All that is valuable in human society depends upon the opportunity for development accorded the individual.
– Albert Einstein

7. The great hope of society is in individual character.
– William Ellery Channing

8. Some people strengthen the society just by being the kind of people they are.
– John W. Gardner

10. People can do whatever they want. It’s when they conform to society that they restrict themselves.
– Erin Pracht

12. Sane is the insanity most call normality put forth by society.
– Erik Till

13. No man can have society upon his own terms. If he seek it, he must serve it too.
– Ralph Waldo Emerson

14. The sign of a good society is where talent is respected.
– Irrfan Khan

15. The opposite of courage in our society is not cowardice, it is conformity.
– Rollo May

17. The most dangerous creation of any society is the man who has nothing to lose.
– James Baldwin

18. The further a society drifts from truth the more it will hate those who speak it.
– George Orwell

19. In an industrial society which confuses work and productivity, the necessity of producing has always been an enemy of the desire to create. – Raoul Vaneigem

20. The whole system of society tells you what to do.
– Barry White

22. Today’s society will ignore almost any form of public behavior except getting in the express line with two extra items.
– Paul Sweeney

23. An ‘ideal society’ would be the graveyard of human greatness.
– Nicolas Gomez Davila

24. A society grows great when old men plant trees whose shade they know they shall never sit in.
– Greek Proverb

25. No one can live entirely on their own, nor can any country or society exist in isolation.
– Daisaku Ikeda

27. If a free society cannot help the many who are poor, it cannot save the few who are rich.
– John F. Kennedy

28. Society is like a stew. If you don’t stir it up every once in a while then a layer of scum floats to the top.
– Edward Abbey

29. We call it a Society; and go about professing openly the totalest separation, isolation. Our life is not a mutual helpfulness; but rather, cloaked under due laws-of-war, named fair competition and so forth, it is a mutual hostility.
– Thomas Carlyle

How To Stop Comparing Yourself To Others 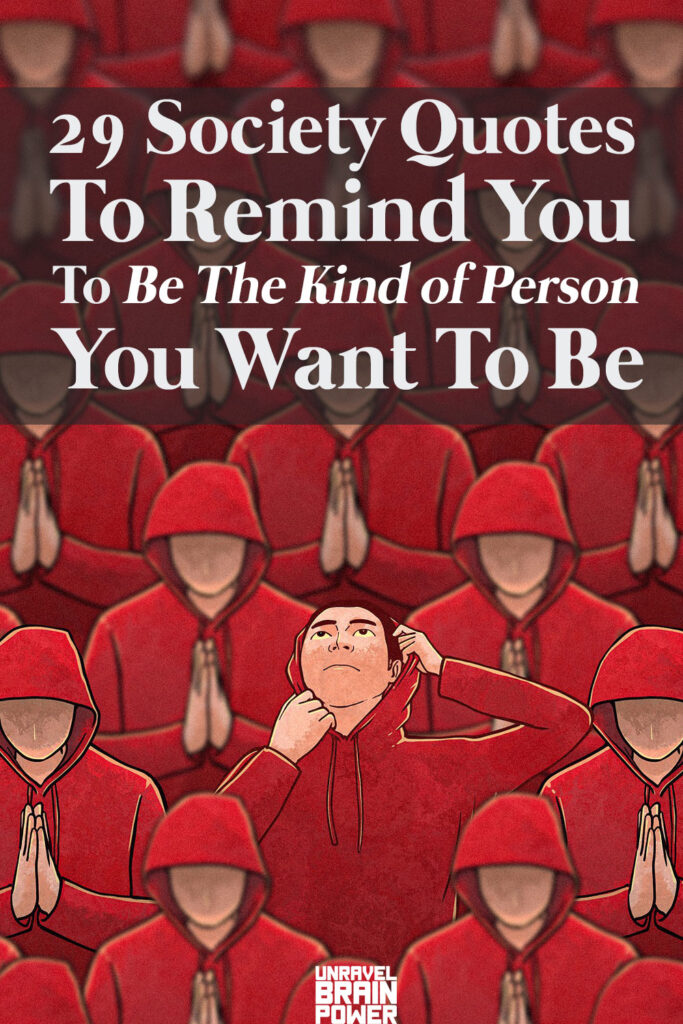