Do you easily feel hurt and offended by a person’s spoken words or behaviour?

When you find yourself getting easily hurt and offended, it becomes really difficult to bring back focus at work and remain unscarred for the rest of the day.

It constantly feels as if you’re constantly under attack, even from your loved ones. Maybe they don’t mean to hurt our sentiments but even then it makes us feel miserable.

Here are 7 things to keep in mind before you take things personally.

1. INTROSPECT – think about it

Try to introspect on what has someone said to you that has stirred up your response – is it actually as bad as you’ve been interpreting it to be? If you’re a sensitive individual who happens to think a lot, then please think – ‘why’ is this happening to you!

The words that an individual is using might not actually be that offensive at all; maybe it’s you, who is ever ready to take things personally and will thus manage to twist anything into an insult because you’re so much habituated in finding an atom bomb everywhere.

If you have had a fixation about the way you look or any other thing which you’ve done in the past, you may subconsciously listen out only for those words that relate to those incidents and then take the whole matter personally.

Maybe the sentence being uttered is absolutely harmless, but we are so fixated with our past memories of certain events that we perceive it as nothing less than an insult.

Now here it is very necessary to think about what actually upsets us! It’s amazing to note if we find that small unusual deviation of words, phrases or behaviour may look ‘offensive’ to us while someone else does not even quote this as negative – this is a fact.

Remember that every single human being in this world is different, just like the five fingers on your hand. So don’t you think it is very natural that your personal definition of “politeness” will be discrete from any other fellow being’s definition of the same?

Introspection is needed at this point and surely you will figure out the clear distinguishing mark in between a normal conversation and an intentionally rude one.

2. Projection of Your Feelings

We all see ourselves in a certain way and it is very likely for each one of us project those feelings onto what people say and how they behave around us.

We have a tendency to think that everything will be centering on our feelings and that we are linked with everything happening around us either by hook or by crook.

A serious consideration is required as to how we feel about ourselves and how often other people say or do anything that actually rings true to our own emotions.

There are many such situations which imply that we are consciously or subconsciously trying to force our own beliefs and feelings onto the other person’s behaviour. Though this might seem to be normal at the scratch but this can really turn destructive.

The only way out is if you start acknowledging that you are projecting your feelings, and as a result interpreting things differently, you’re actually taking a huge step in the right direction!

3. Projection of Their Feelings

There are times when the things we do and say have nothing much to do with the person we’re interacting with. Instead, our behavior towards that person is actually a reflection of us and our feelings about ourselves.

So whenever you see someone saying or doing something that is ‘offensive’, remind yourself that they may be projecting their feelings and thoughts on you which mean that their words or actions are not a reflection on you so therefore you should not take it personally.

Suppose there is someone at work who is always criticizing you (which anyone would take personally)- the reason is that he or she is jealous of you and insecure about his/her own performance at work  and that is the only reason they are behind you, isn’t it?

Next, consider a woman who taunts you about your looks- She is probably just thinking about how you look because, she’s herself consumed with thoughts about how she looks and spending her days looking at the mirror and doing nothing productive at the end of the day. Here, she is just tearing you down just to feel good about herself.

So will you bother yourself with such stuffs anymore? Calm down and think.

Quite often we take things personally when we sense something is targeting our own insecurities either intentionally or not.  Those things which other people consider as harmless might actually be the ones hitting us in our weakest points.

Like someone may have said or done something which made you feel sad without saying or doing it intentionally to upset you; and it’s just your interpretation that is making everything sound and look offensive and upsetting.

Always remember that ‘All of us are in the same gutter but some are looking at the stars while others are not!’ This means that everyone of us have a different perspective about the same thing and so people might not even realize that something they’ve said or done feels relevant to you.

For instance, someone at work may be complaining about a colleague who they feel is not up to the mark in their job – now if you already feel like you’re not doing well at work too, you’re likely to presume they’re talking about you and get upset as a result. But in reality, they’re talking about somebody else and because they think you’re doing well at your job, they didn’t think of censoring that conversation around you.

Next try to imagine that a friend of yours is having the same issues that you are. You’d do your best to comfort them and explain that people aren’t trying to hurt their feelings, and that it’s just their low self-confidence that’s making them feel this way.

Self-esteem is something that so many of us struggle with everyday, and it really takes time and effort to build it up.

One thing which can be done here is to acknowledge your self-esteem. By accepting that you do take things personally to your heart and that you often struggle to feel good about yourself, you’re actually accepting that your behavior may not always be a rational response and that’s absolutely okay!

Many of us are resistant to change our mindsets and grow as we do. You may still see yourself the same way you did years ago, despite of so many changes you may have encountered in these years.

It can be hard to change how we see ourselves, but if we let our mind shift to a more positive place, we’ll get to see more sparks in our lives!

Nowadays, we are entangled with thoughts about how we present ourselves in front of the world and particularly in social media. We put in too much effort on people to ‘like’ us and validate us as individuals, which does makes sense, but is very unhealthy.

We must learn to let go of other people’s opinions, as this is one of the biggest cause of taking everything personally. If you’re constantly trying to be someone you’re not but, doing it just to impress other people then yes, of course you’re going to be more prone to feeling insecure and insulted.

Just remember that only the opinions of your loved ones matter the most! So even if they criticize, you can rest assured that it will be a constructive one and offered for your benefit.

Coming to everyone else, even if they choose to insult you or make you feel bad about yourself, why would you want to listen to them?

Start to make a list of things that you like about yourself and your life – this could be anything related to your appearance your traits or your hobbies. Finding ways to be positive about your life will really help you not to care about things which are irrelevant and that way you will stop taking things personally every now and then.

It is important to realize that your life is actually amazing (or that you need to make few changes to make it better, which is again a positive thing) you’re less likely to take everything as an insult.

After all, the more you love your life, the less likely you are to believe that anyone else would try to find fault with it. The more confident you are about yourself and your capabilities, the less you’ll take things personally.

Happiness lies within you.

6. Try to Reflect and Rationalize

Try to consider how you’d expect someone else to react if you said the same thing to them that triggered an emotional response from you – do you think it would be unlikely if you expect them to be upset.

Take a note of things people say or do that you find offensive and later check out what you have written. You may still find the comment or action as upsetting, but you’ll more often find that it wasn’t really that bad as you thought it was previously.

Taking things personally is our immediate reaction to a so called “stirring up situation”, which is difficult to breakthrough. So the best way out here is to give oneself some space and time to reflect on the matter and realize that not everything is offensive. The more you can do this, the weaker the connections between a word or action and your feeling upset will be.

Basically, you’re training your mind to take a different path, which will take some time and effort.

Our brain forms neural pathways over time in response to patterns of behavior, so by taking a step back and letting yourself rationalize things, you’re teaching your brain new responses that will ultimately become automatic and habitual behaviors in the later run.

A lot of what we think that we feel is all in our heads and it is often quite contrasting to the real scenario. A way of taking control is by simply accepting how you feel and realizing that it is valid, but also realizing that it does not serve you much.

It’s miserable and exhausting being trapped in a cycle of feeling isolated and threatened, but you can definitely take steps to break it. Can’t you?

Yes it will take some of your precious time, so at first be kind and patient with yourself. Be positive and just remember that you deserve a peaceful life! 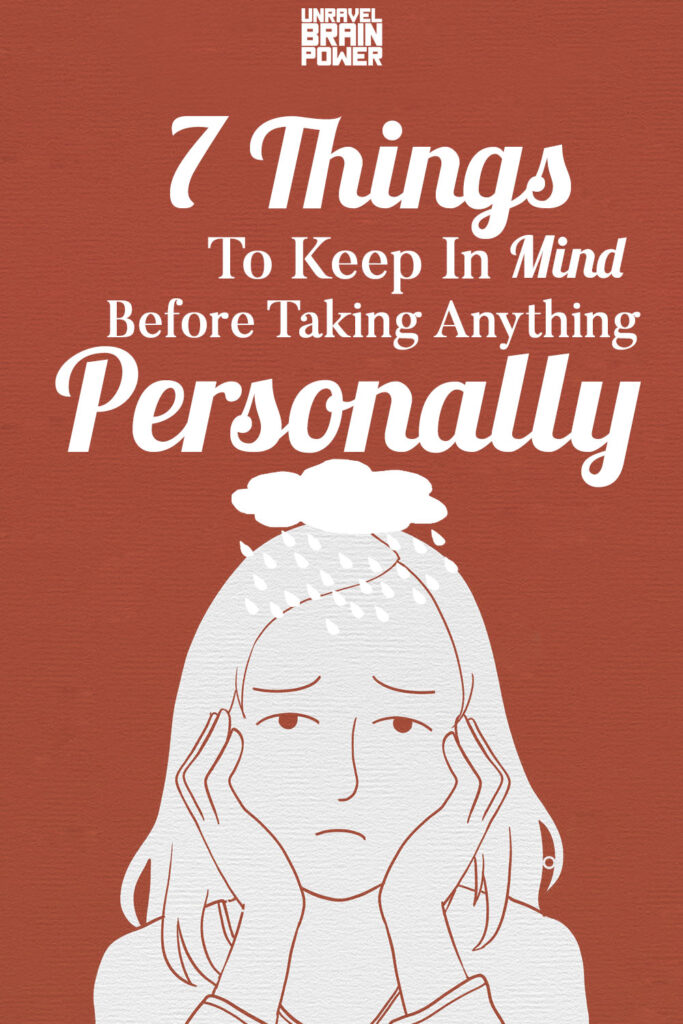