1. I am a firm believer in the people. If given the truth, they can be depended upon to meet any national crisis. The great point is to bring them the real facts.
– Abraham Lincoln

2. Be Impeccable with Your Word. Speak with integrity. Say only what you mean. Avoid using the word to speak against yourself or to gossip about others. Use the power of your word in the direction of truth and love.
– Don Miguel Ruiz

3. No legacy is so rich as honesty.
– William Shakespeare

4. We learned about honesty and integrity – that the truth matters… that you don’t take shortcuts or play by your own set of rules… and success doesn’t count unless you earn it fair and square.
– Michelle Obama

5. A great man does not seek applause or place; he seeks for truth; he seeks the road to happiness, and what he ascertains, he gives to others.
– Robert Green Ingersoll

6. Truth is so rare that it is delightful to tell it.
– Emily Dickinson

7. Whoever is careless with the truth in small matters cannot be trusted with important matters.
– Albert Einstein

8. The truth is not for all men, but only for those who seek it.
– Ayn Rand

10. Three things cannot be long hidden: the sun, the moon, and the truth.
– Buddha

11. Our duty is to encourage everyone in his struggle to live up to his own highest idea, and strive at the same time to make the ideal as near as possible to the Truth.
– Swami Vivekananda

12. You can hate me. You can go out there and say anything you want about me, but you will love me later because I told you the truth.
– Mary J. Blige

13. For every good reason there is to lie, there is a better reason to tell the truth.
– Bo Bennett

14. The goal of education is the advancement of knowledge and the dissemination of truth.
– John F. Kennedy

15. Truth is the torch that gleams through the fog without dispelling it.
– Claude Adrien Helvetius

16. Once you eliminate the impossible, whatever remains, no matter how improbable, must be the truth.
– Arthur Conan Doyle

17. Nothing is more noble, nothing more venerable than fidelity. Faithfulness and truth are the most sacred excellences and endowments of the human mind.
– Marcus Tullius Cicero

18. The truth is incontrovertible. Malice may attack it, ignorance may deride it, but in the end, there it is.
– Winston Churchill

19. Honesty is the first chapter in the book of wisdom.
– Thomas Jefferson

20. Stop holding your truth; speak your truth. Be yourself. It’s the healthiest way to be.
– Tiffany Haddish

21. We live in a fantasy world, a world of illusion. The great task in life is to find reality.
– Iris Murdoch

22. Truth is ever to be found in simplicity, and not in the multiplicity and confusion of things.
– Isaac Newton

23. Rather than love, than money, than fame, give me truth.
– Henry David Thoreau

24. I believe there’s an inner power that makes winners or losers. And the winners are the ones who really listen to the truth of their hearts.
– Sylvester Stallone

25. A dog barks when his master is attacked. I would be a coward if I saw that God’s truth is attacked and yet would remain silent.
– John Calvin

26. There is no greatness where there is no simplicity, goodness and truth.
– Leo Tolstoy

27. On the mountains of truth, you can never climb in vain: either you will reach a point higher up today, or you will be training your powers so that you will be able to climb higher tomorrow.
– Friedrich Nietzsche

28. Morality is the basis of things and truth is the substance of all morality.
– Mahatma Gandhi

29. There is nothing so strong or safe in an emergency of life as the simple truth.
– Charles Dickens

30. There’s nothing so kingly as kindness, and nothing so royal as truth.
– Alice Cary

33 Inspirational Quotes For Your New Direction In Life 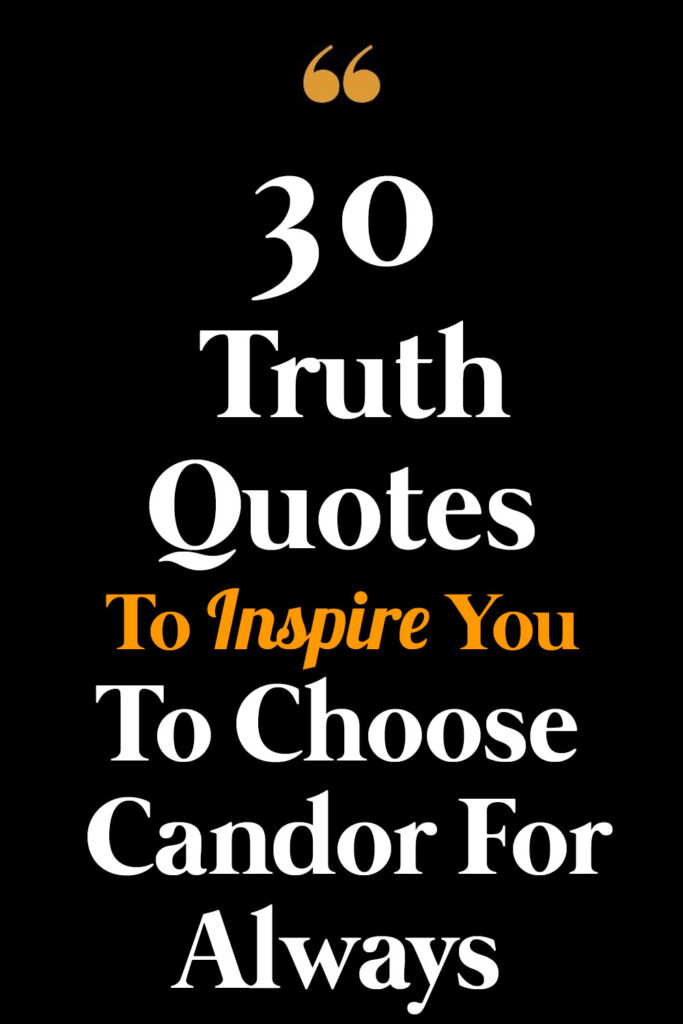