Sir Winston Churchill is an exemplary and one of the most admirable leaders in world history. His legendary tenacity and a profound sense of conviction as a British Prime Minister rallied the Allied countries to victory against Hitler’s Germany in 1945. He had remarkable oratory and steadfast leadership during the London Blitz which held the frightened British nation together.

As a Prime Minister during the war and at a crucial moment for the world, Churchill’s devotion and courage quite literally changed the course of history. Years after, his legacy continues to inspire people from across the political world. In 2002, in a poll conducted by the BBC, Winston Churchill was named the Greatest Briton of All Time.

Winston was famous for his wit and wisdom as much as brave and cautious leadership. Upon his death in 1965, Winston Churchill left a ton of sayings that still inspire us to this day with their precision and practical implementation in life.

You have enemies? Good. That means you’ve stood up for something, sometime in your life.

To improve is to change, so to be perfect is to have changed often.

I never ‘worry’ about action, but only about inaction.

Success consists of going from failure to failure without loss of enthusiasm.

You will never get to the end of the journey if you stop to shy a stone at every dog that barks.

One always measures friendships by how they show up in bad weather.

Success is not final, failure is not fatal: it is the courage to continue that counts.

For myself I am an optimist — it does not seem to be much use being anything else.

To be really happy and really safe, one ought to have at least two or three hobbies, and they must all be real.

Nourish your hopes, but do not overlook realities.

You must look at facts, because they look at you.

It is better to be making the news than taking it; to be an actor rather than a critic.

I have in my life concentrated more on self-expression than self-denial.

You never can tell whether bad luck may not after all turn out to be good luck.

The true guide of life is to do what is right.

Things are not always right because they are hard, but if they are right one must not mind if they are also hard.

You must put your head into the lion’s mouth if the performance is to be a success. 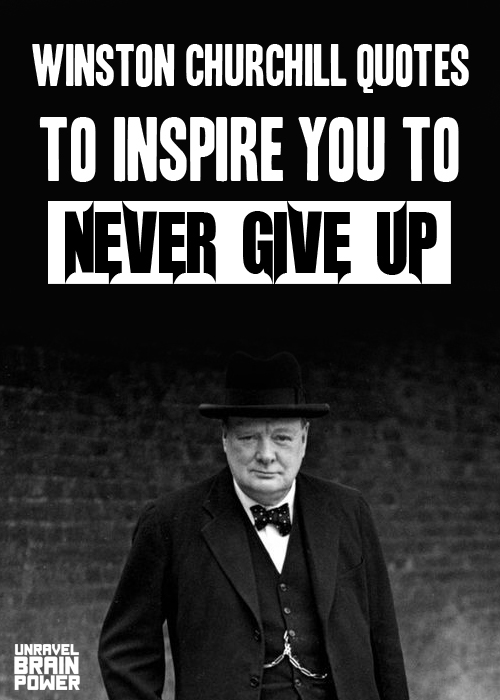