In life, we constantly seek new sources of wisdom in order to help us understand this journey a little bit better. Life may not always give you what you want, but it always gives you what you need, and quotes from famous philosophers, musicians, and authors can provide you with the understanding that you seek. While the truest wisdom comes from within ourselves, sometimes you just need a little inspiration and knowledge from others.

1. “If you always put limits on everything you do, physical or anything else, it will spread into your work and into your life. There are no limits. There are only plateaus, and you must not stay there, you must go beyond them.” -Bruce Lee

2. “Unless you try to do something beyond what you have already mastered, you will never grow”.
-Ralph Waldo Emerson

3. ‘Buddha was asked, “What have you gained from meditation?” He replied, “Nothing!” However, Buddha said, let me tell you what I lost:Anger, Anxiety, Depression, Insecurity, Fear of Old, Age and Death.”‘

4. “The best teachers are those who show you where to look, but don’t tell you what to see.”
– Alexandra K. Trenfor

5. “Be kind, for everyone you meet is fighting a hard battle.” –  Plato

6. “Because the people who are crazy enough to think they can change the world, are the ones who do.” – Steve Jobs

8. “Never doubt that a small group of thoughtful citizens can change the world. Indeed, it is the only thing that ever has.” -Margaret Mead

9. “In a time of deceit, telling the truth is a revolutionary act.” – George Orwell

10. Man: ‘I want happiness’
Buddha: First remove”I”,this is ego. Then remove “Want”, this is desire. Finally all that remains is “happiness.”

11. “Logic will get you from A to B. Imagination will take you everywhere.” – Albert Einstein

12. “Everything that irritates us about others can lead us to an understanding of ourselves.” – Carl Jung

14. “Do not pray for an easy life. Pray for the strength to endure a difficult one” – Bruce Lee

16. “Let yourself be silently drawn by the strange pull of what you really love. It will not lead you astray.” – Rumi

17. “It is no measure of good health to be well adjusted to a profoundly sick society” – Jiddu Krishnamurti

18. “The first time someone shows you who they are, believe them.” – Maya Angelou

19. “Normal is an illusion. What is normal for the spider is chaos for the fly.” – Morticia Addams

22. “He who controls others may be powerful but he who has mastered himself is mightier still.”
–  Lao Tzu

24. “You have enemies? Good; that means you have stood up for something, sometime in your life.” – Winston Churchill

25. “To live is the rarest thing in the world. Most people exist, that is all.” – Oscar Wilde

26. “We can’t solve problems by using the same kind of thinking we used when we created them”
– Albert Einstein

27. “Loneliness is and will always be the most abundant source of human experience.”
– Swami Vivekanand

28. “You might never fail on the scale I did, but some failure in life is inevitable. It is impossible to live without failing at something, unless you live so cautiously that you might as well not have lived at all – in which case, you fail by default.” – J.K. Rowling

29. “The beautiful thing about fear is that when you run to it, it runs away.” – Robin Sharma

30. “So many people live within unhappy circumstances and yet will not take the initiative to change their situation because they are conditioned to a life of security, conformity, and conservatism, all of which may appear to give one peace of mind, but in reality nothing is more dangerous to the adventurous spirit within a man than a secure future.” – Christopher McCandless

31. “When I was 5 years old, my mother always told me that happiness was the key to life. When I went to school, they asked me what I wanted to be when I grew up. I wrote down “happy.” They told me I didn’t understand the assignment, and I told them they didn’t understand life.” – John Lennon

32. “Everybody is a genius. But if you judge a fish by its ability to climb a tree, it will live its whole life believing that it is stupid.” – Albert Einstein

34. “A mind that is stretched by a new experience can never go back to its old dimensions.” – Oliver Wendell Holmes

37. “Happiness is like a butterfly. The more you chase it, the more it eludes you. But if you turn your attention to other things, it comes and sits softly on your shoulder.” – Henry David Thoreau

39. “We are what we repeatedly do; excellence, then, is not an act but a habit.” – Aristotle

40. “It is the mark of an educated mind to be able to entertain a thought without accepting it.”
– Aristotle

41. “Normal is getting dressed in clothes that you buy for work and driving through traffic in a car that you are still paying for – in order to get to the job you need to pay for the clothes and the car, and the house you leave vacant all day so you can afford to live in it.” – Ellen Goodman

42. “I am the wisest man alive, for I know one thing, and that is that I know nothing.” – Socrates

44. “Life isn’t about finding yourself. Life is about creating yourself.” – George Bernard Shaw

45. “The flower that blooms in adversity is the rarest and most beautiful of all.”
– Walt Disney Company, Mulan

46. “Do not go where the path may lead, go instead where there is no path and leave a trail.”
– Ralph Waldo Emerson

48. “You yourself, as much as anybody in the entire universe, deserve your love and affection”
– Gautama Buddha

49. “The past has no power over the present moment.” – Eckhart Tolle

50. “The truth is, everyone’s going to hurt you. You’ve just got to find the ones worth suffering for.”
– Bob Marley

51. “I can be changed by what happens to me. But I refuse to be reduced by it.” – Maya Angelou

52. “Rock bottom became the solid foundation on which I rebuilt my life.” – J.K. Rowling

54. “What lies behind us and what lies before us are tiny matters compared to what lies within us.” — Ralph Waldo Emerson

55. “If you are patient in one moment of anger, you will escape a hundred days of sorrow.”
– Ancient Chinese Proverb

56. “An eye for an eye will only make the whole world blind.” — Mahatma Gandhi

57. “A man is but the product of his thoughts. What he thinks, he becomes.” — Mahatma Gandhi

58. “Your vision will become clear only when you can look into your own heart. Who looks outside, dreams; who looks inside, awakens.” – Carl Jung

60. “I have found the paradox, that if you love until it hurts, there can be no more hurt, only more love.” – Mother Teresa

62. “Your task is not to seek for love, but merely to seek and find all the barriers within yourself that you have built against it.” – Rumi

63. “Never be bullied into silence, never allow yourself to be made a victim. Accept no one’s definition of your life, define yourself.” – Robert Frost

64. “You cannot be lonely if you like the person you’re alone with.” – Wayne Dyer

65. “Our greatest glory is not in never failing, but in rising every time we fail.” – Confucius

66. “A person who never made a mistake never tried anything new.” – Albert Einstein

67. “Happiness can be found, even in the darkest of times, if one only remembers to turn on the light.” – JK Rowling

68. “To be beautiful means to be yourself. You don’t need to be accepted by others. You need to accept yourself.” – Thich Nhat Hanh

69. “Life will give you whatever experience is most helpful for the evolution of your consciousness.” – Eckhart Tolle

70. “You yourself are the eternal energy of the Universe. You didn’t come into this world; you came out of it. Like a wave from the ocean.” – Alan Watts

71. “Only those who will risk going too far can possibly find out how far one can go.”
– T. S. Eliot

74. “Twenty years from now you will be more disappointed by the things you didn’t do than by the ones you did do.” – Mark Twain

75. “Two roads diverged in a wood and I – I took the one less traveled by.” – Robert Frost

76. “As we express our gratitude, we must never forget that the highest appreciation is not to utter words but to live by them.” – John F. Kennedy

77. “With everything that has happened to you, you can either feel sorry for yourself or treat what has happened as a gift. Everything is either an opportunity to grow or an obstacle to keep you from growing. You get to choose.” – Wayne Dyer

78. “Great spirits have always encountered violent opposition from mediocre minds. The mediocre mind is incapable of understanding the man who refuses to bow blindly to conventional prejudices and chooses instead to express his opinions courageously and honestly.”— Albert Einstein

81. “The secret of change is to focus all of your energy not on fighting the old, but on building the new.” – Socrates

82. “Your time is limited, so don’t waste it living someone else’s life. Don’t be trapped by dogma – which is living with the results of other people’s thinking. Don’t let the noise of others’ opinions drown out your own inner voice. And most important, have the courage to follow your heart and intuition.” – Steve Jobs

85. “In the end, it’s not the years in your life that count. It’s the life in your years.”
– Abraham Lincoln

86. “Life is ten percent what happens to you and ninety percent how you respond to it.”
– Lou Holtz

87. “Our prime purpose in this life is to help others. And if you can’t help them, at least don’t hurt them.” – Dalai Lama

89. “Be who you are and say what you feel because those who mind don’t matter and those who matter don’t mind.” – Dr. Seuss

90. “We’re all going to die, all of us, what a circus! That alone should make us love each other but it doesn’t. We are terrorized and flattened by trivialities, we are eaten up by nothing.”  ? Charles Bukowski

91. “Stop letting people who do so little for you control so much of your mind, feelings, and emotions.” – Will Smith

92. “Thousands of candles can be lit from a single candle, and the life of the candle will not be shortened. Happiness never decreases by being shared.” – Buddha

93. “Laugh when you can, apologize when you should, and let go of what you can’t change. Kiss slowly, play hard, love deeply, forgive quickly, take chances, give everything, and have no regrets. Life is too short to be anything but happy.” – Unknown

97. “The most beautiful people we have known are those who have known defeat, known suffering, known struggle, known loss, and have found their way out of the depths. These persons have an appreciation, a sensitivity, and an understanding of life that fills them with compassion, gentleness, and a deep loving concern. Beautiful people do not just happen.” – Elisabeth Kübler-Ross

98. “Here’s to the crazy ones, the misfits, the rebels, the troublemakers, the round pegs in the square holes… the ones who see things differently — they’re not fond of rules… You can quote them, disagree with them, glorify or vilify them, but the only thing you can’t do is ignore them because they change things… they push the human race forward, and while some may see them as the crazy ones, we see genius…” – Steve Jobs

99. “Owning our story can be hard but not nearly as difficult as spending our lives running from it. Embracing our vulnerabilities is risky but not nearly as dangerous as giving up on love and belonging and joy—the experiences that make us the most vulnerable. Only when we are brave enough to explore the darkness will we discover the infinite power of our light.” – Brené Brown

100. “All life is an experiment. The more experiments you make, the better.”
– Ralph Waldo Emerson 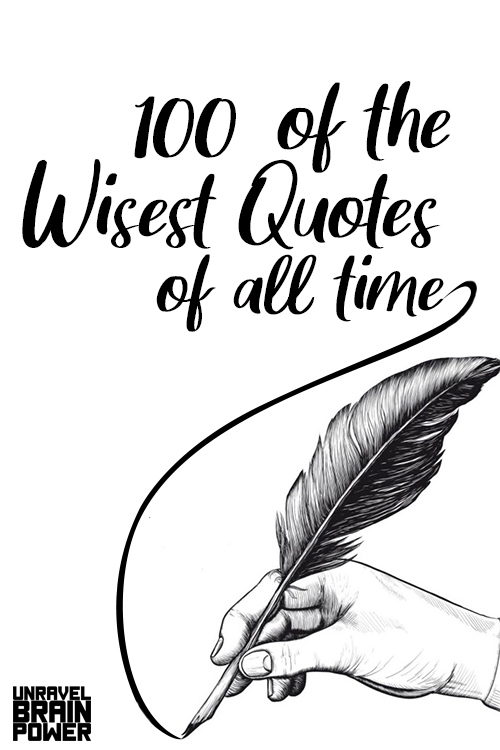