We have collected the best Baseball quotes by top baseball players, coaches, and from baseball movies.

1. Baseball is ninety percent mental. The other half is physical.
– Yogi Berra

3. Baseball ain’t like football. You can’t make up no trick plays.
– Yogi Berra

4. Love is the most important thing in the world, but baseball is pretty good, too.
– Yogi Berra

5. The game of baseball isn’t over until it’s over.
– Yogi Berra

6. Little League baseball is a very good thing because it keeps the parents off the streets.
– Yogi Berra

8. This is like Deja vu all over again.
– Yogi Berra

9. It’s unbelievable how much you don’t know about the game you’ve been playing your whole life.
– Mickey Mantle

10. If the people don’t wanna come out to the ballpark, nobody’s gonna stop ’em.
– Yogi Berra

11. Every strike brings me closer to the next home run.
– Babe Ruth

13. Think?! How are you supposed to think and hit at the same time?
– Yogi Berra

14. I never blame myself when I’m not hitting. I just blame the bat, and if it keeps up, I change bats.
– Yogi Berra

15. Baseball was, is, and always will be the best game in the world to me.
– Babe Ruth

16. If my uniform doesn’t get dirty, I haven’t done anything in the baseball game.
– Rickey Henderson

17. I’d be willing to bet you, if I was a betting man, that I have never bet on baseball.
– Pete Rose

18. Never allow the fear of striking out keep you from playing the game.
– Babe Ruth

19. I never smile when I have a bat in my hands. That’s when you’ve got to be serious.
– Hank Aaron

20. Every day is a new opportunity. You can build on yesterday’s success or put its failures behind and start over again. That’s the way life is, with a new game every day, and that’s the way baseball is.
– Bullet Bob Feller

21. People ask me what I do in the winter when there’s no baseball. I’ll tell you what I do. I stare out the window and wait for spring.
– Rogers Hornsby

22. Playing baseball for a living is like having a license to steal.
– Pete Rose

24. One of the beautiful things about baseball is the history.
– James Anthony Abbott

25. For all its gentility, its almost leisurely pace, baseball is violence under wraps.
– Willie Mays

27. I could have played baseball another year, but I would have been playing for the money, and baseball deserves better than that.
– George Brett

30. The way to make coaches think you’re in shape in the spring is to get a tan.
– Whitey Ford

31. Nothing’s ever been as fun as baseball.
– Mickey Mantle

33. A life is not important except in the impact it has on other lives.
– Jackie Robinson

34. I never had a job. I just always played baseball.
– Satchel Paige

35. I’m a guy who just wanted to see his name in the lineup everyday. To me, baseball was a passion to the point of obsession.
– Brooks Robinson

36. If you have a bad day in baseball and start thinking about it, you will have 10 more.
– Sammy Sosa

39. I am convinced that God wanted me to be a baseball player.
– Roberto Clemente

40. When I was up there at the plate, my purpose was to get on base any way I could, whether by hitting or getting hit.
– Shoeless Joe Jackson

42. There is no room in baseball for discrimination. It is our national pastime and a game for all.
– Lou Gehrig

43. I’d walk through hell in a gasoline suit to play baseball.
– Pete Rose

44. You could be a kid for as long as you want when you play baseball.
– Cal Ripken, Jr.

45. Early in my career, I decided I never wanted to get out of shape.
– Cal Ripken, Jr.

46. If you’re going to play at all, you’re out to win. Baseball, board games, Jeopardy, I hate to lose.
– Derek Jeter

47. I think I was the best baseball player I ever saw.
– Willie Mays

48. The other sports are just sports. Baseball is a love.
– Sportscaster, Bryant Gumbel

49. Catching a fly ball is a pleasure, but knowing what to do with it after you catch it is a business.
– Tommy Henrich

50. Baseball is dull only to dull minds.
– Sportscaster, Red Barber

52. Baseball is a lot like life. It’s a day-to-day existence, full of ups and downs. You make the most of your opportunities in baseball as you do in life.
– American Sportscaster, Ernie Harwell

54. Baseball has long been a national pastime that many Americans have cherished.
– American Politician, Jim Sensenbrenner.

55. Poets are like baseball pitchers. Both have their moments. The intervals are the tough things.
– American Poet, Robert Lee Frost

56. Baseball is more than a game to me, it’s a religion.
– MLB Umpire, William ‘Bill’ Klem

58. As a kid, before I could play music, I remember baseball being the one thing that could always make me happy.
– Country Singer, Garth Brooks

59. Baseball is more than a game. It’s like life played out on a field.
– Musician, Juliana Hatfield

60. Progress always involves risk. You can’t steal second base and keep your foot on first.
– Frederick B. Wilcox

61. A hot dog at the game beats roast beef at the Ritz.
– American Actor, Humphrey Bogart

62. Baseball is one of the most beautiful games. It is a very zen-like game.
– American Film Director, Jim Jarmusch

63. Baseball, it is said, is only a game. True. And the Grand Canyon is only a hole in Arizona.
– Journalist & Autor, George Will

64. There are only two seasons: winter and baseball.
– Bill Veeck, Jr.

65. A baseball manager is a necessary evil.
– George ‘Sparky’ Anderson

66. Bad ballplayers make great managers, not the other way around. All I can do is help them be as good as they are.
– Earl Weaver

67. Whoever wants to know the heart and mind of America had better learn baseball.
– French-American Historian, Jacques Barzun

68. There are three types of baseball players: those who make it happen, those who watch it happen, and those who wonder what happened.
– Tommy Lasorda

69. Baseball is like driving, it’s the one who gets home safely that counts.
– Tommy Lasorda

70. Baseball is like church. Many attend, but few understand.
– Leo Ernest Durocher

71. Baseball is the only field of endeavor where a man can succeed three times out of ten and be considered a good performer.
– Ted Williams

72. The first books I was interested in were all about baseball.
– American Journalist, Charles Kuralt.

76. Never save a pitcher for tomorrow. Tomorrow it may rain.
– Leo Durocher

78. I’ve come to the conclusion that the two most important things in life are good friends and a good bullpen.
– Bob Lemon

81. How can you not be romantic about baseball?
– Moneyball

82. Man, this is baseball. You gotta stop thinking, just have fun.
– The Sandlot

83. There’s no crying in baseball!
– A League of Their Own

84. Baseball is a universal language. Catch the ball, throw the ball, hit the ball.
– Pete Rose in My Prison Without Bars

86. I see great things in baseball. It’s our game, the American game. It will repair our losses and be a blessing to us all.
– Bull Durham

87. Baseball is an American icon. It is the Statue of Liberty, the bald eagle, ‘In God We Trust,’ Mount Rushmore, ice cream, apple pie, hot dogs, and rally monkeys. Baseball is America.
– Victor Baltov, Jr. in Baseball Is America

88. Baseball is not a conventional industry. It belongs neither to the players nor management, but to all of us. It is our national pastime, our national symbol, and our national treasure.
– John Thorn in Baseball: Our Game

89. Baseball is a drama with an endless run and an ever-changing cast.
– Joe Garagiola in Baseball Is A Funny Game

We hope you enjoyed these baseball quotes. Share with your friends and family or a baseball fan.

Commonwealth Day Quotes To Send Across On This Day 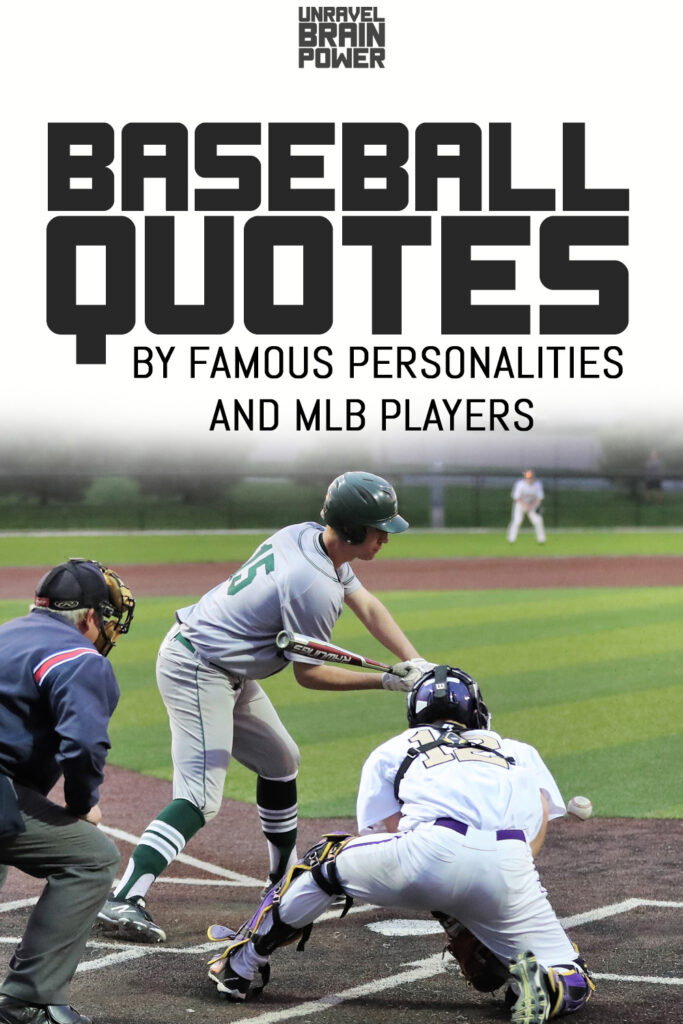