1. Everyone has inside them a piece of good news. The good news is you don’t know how great you can be! How much you can love! What you can accomplish! And what your potential is.
– Anne Frank

2. A word of encouragement during a failure is worth more than an hour of praise after success.
– Unknown

4. This too shall pass.
– Persian Sufi Poets

5. It is time for us all to stand and cheer for the doer, the achiever – the one who recognizes the challenges and does something about it.
– Vince Lombardi

6. Often we women are risk averse. I needed the push. Now, more than ever, young women need more seasoned women to provide that encouragement, to take a risk, to go for it. Once a glass ceiling is broken, it stays broken.
– Jennifer Granholm

7. When you get to your wits end, you will find, God lives there.
– Unknown

8. In essence, if we want to direct our lives, we must take control of our consistent actions. It’s not what we do once in a while that shapes our lives, but what we do consistently.
– Tony Robbins

10. Talent is cheaper than table salt. What separates the talented individual from the successful one is a lot of hard work.
– Stephen King

11. Character cannot be developed in ease and quiet. Only through experience of trial and suffering can the soul be strengthened, ambition inspired, and success achieved.
– Helen Keller

12. He who has a why to live can bear almost any how.
– Friedrich Nietzsche

14. Most of us, swimming against the tides of trouble the world knows nothing about, need only a bit of praise or encouragement – and we will make the goal.
– Jerome Fleishman

15. When written in Chinese the word ‘crisis’ is composed of two characters – one represents danger and the other represents opportunity.
– John F. Kennedy

16. Defeat may serve as well as victory to shake the soul and let the glory out.
– Edwin Markham

17. There is in every true woman’s heart a spark of heavenly fire, which lies dormant in the broad daylight of prosperity; but which kindles up, and beams and blazes in the dark hour of adversity.
– Washington Irving

18. God uses suffering as a whetstone, to make men sharp with.
– Henry Beecher

19. Perhaps everything terrible is in its deepest being something helpless that wants help from us.
– Rainer Rilke

22. If the wind will not serve, take to the oars.
– Latin Proverb

23. God brings men into deep waters, not to drown them, but to cleanse them.
– John Aughey

24. Never regret something that once made you smile.
– Amber Deckers

25. It doesn’t matter who you are, where you come from. The ability to triumph begins with you. Always.
– Oprah Winfrey

26. Applause is the spur of noble minds, the end and aim of weak ones.
– Edmund Burke

27. What the caterpillar calls the end of the world, the master calls a butterfly.
– Richard Bach

30. In the middle of difficulty lies opportunity.
–Albert Einstein

31. It doesn’t matter how slow you go as long as you don’t stop. –Confucius

32. Life is 10 percent what happens to me and 90 percent how I react to it.
– Charles Swindoll

33. The only person you are destined to become is the person you decide to be.
–Ralph Waldo Emerson

34. It doesn’t matter how many say it cannot be done or how many people have tried it before; it’s important to realize that whatever you’re doing, it’s your first attempt at it.
– Wally Amos

35. The secret of health for both mind and body is not to mourn for the past, not to worry about the future, but to live the present moment wisely and earnestly.
–Buddha

37. Embrace uncertainty. Some of the most beautiful chapters in our lives won’t have a title until much later.
–Bob Goff

38. Worry does not empty tomorrow of its sorrow, it empties today of its strength.
– Corrie Boom

39. Go confidently in the direction of your dreams. Live the life you have imagined.
– Henry Thoreau

40. Never let the odds keep you from doing what you know in your heart you were meant to do.
– H. Jackson Brown Jr.

41. You will never do anything in this world without courage. It is the greatest quality in the mind next to honor.
– Aristotle

42. If one dream should fall and break into a thousand pieces, never be afraid to pick one of those pieces up and begin again.
– Flavia

43. When life knocks you down, try to land on your back. Because if you can look up, you can get up.
– Les Brown

44. When you come to the end of your rope, tie a knot and hang on.
– Franklin D Roosevelt

45. Believe you can and you’re halfway there.
–Theodore Roosevelt 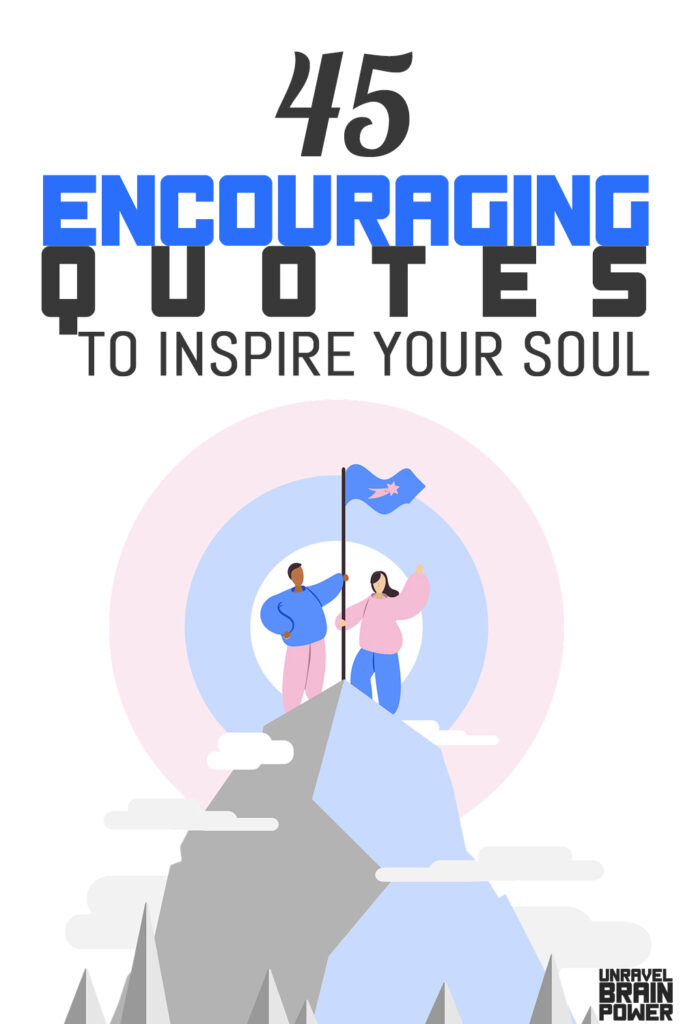