He’s authored more than 20 books on the philosophy and psychology of religion and has built an extensive archive of lectures in audio form, brimming with his characteristic lucidity and humor.
Watts spent his career teaching others how to unlearn everything that society teaches us, and focuses much on recognizing that the only moment that exists perpetually is the one we live in presently.

Any questions about life, love, reality, or the self can be illuminated by Watts and his ideas that quench existential wonder.  Even after his death in 1973, his teachings and musings remain applicable to our day-to-day lives.

Here are 30 of his most famous quotes:

“This whole world is a phantasmagoria, an amazing illusion.”
“We notice only what we think noteworthy, and therefore our visions highly selective.”
“Memory creates the future as well as the past, you wouldn’t know that you were going to have anything happen tomorrow if you didn’t have something yesterday.”
“The world is precisely the relationship between the world and its witnesses, and so if there are no eyes in this world, the sun doesn’t make any light, nor do the stars.”
“If you don’t remember anything you don’t know you’re there.”
“There is nothing except the eternal now.”
“Things and events have only a verbal reality.”

“An artist is a person who performs certain things skillfully, but doesn’t really know how he does it. You learn art by methods that you don’t know how you learnt, you can’t describe, because your brain is capable of absorbing all kinds of information that is much too subtle to be translated into words.”
“Creative people can stimulate creativity in others, by osmosis.”

“Dying should be one of the great events of life.”
“The meaning of being alive is just being alive.”

“Everybody has to be salted by a certain unrespectability.”
“The positive cannot exist without the negative.”
“To be implies not to be.”
“All insides have outsides.”
“You can only be on the in relation to something that is out.”

“Choice is not a form of freedom in the sense of the word; choice is the act of hesitation that occurs before making a decision.”
“We have been literally hypnotized by social convention into feeling and sensing that we exist only inside our skins.”
“Every manifestation of life is impermanent. Our quest to make things permanent, to straighten everything out, to get it fixed is an impossible and insoluble problem.”

“There are no wrong feelings.”
“This is one of the peculiar problems of our culture, that we are terrified of our feelings.”
“Most problems that are solved in a rush are solved in the wrong way, especially emotional problems between people.”
“We have frustration because we are fighting the changing of things.”

“The first thing to discover is what indeed you do love, and you will find there is something.”
“Love is not something that is a sort of rare commodity, everybody has it.”
“Never pretend to a love which you do not actually feel, for love is not ours to command.” 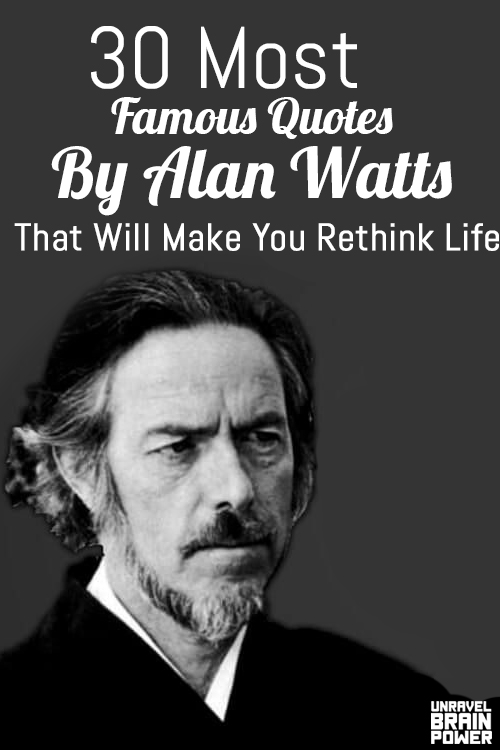 Read More – 100 of the Wisest Quotes of All Time