Here are top 14 Powerful and Funny Quotes By Negin Farsad

1.“The American population can be broken up into three main categories: there’s mostly wonderful people, haters, and Florida.” —Negin Farsad

3.“It’s funny but sneaky. Like you could be hearing an interesting treatise on income inequality that’s encased in a really sophisticated poop joke.” —Negin Farsad

4.“Now, the posters were truly offensive, not to mention poorly designed—I mean if you’re going to be bigoted you might as well use a better font.” —Negin Farsad

6.“The point of the website is that it denounces terrorism while at the same time recognizing that it’s ridiculous that we have to constantly denounce terrorism.” —Negin Farsad

7.“We’ve tried a lot of approaches to social justice, like war and competitive ice dancing. But still, a lot of things are still kind of awful. So I think it’s time we try and tell a really good poop joke.” —Negin Farsad

8.”What makes comedy so effective is that if you’re making them laugh along the way, they’re going to listen to the deeper cut stuff.” —Negin Farsad

9.“As a social justice comedian it’s my goal to convert these haters because they hate a lot of things which lead to negative outcomes like racism, violence and Ted Nugent.” —Negin Farsad

10.“Well, the way I like to look at it is you get one person to laugh and then a couple people laugh. And then over a lifetime, you might get like a million people chuckling. And those chuckles add up to some measure of a popular shift in perception. And that is social change. But it takes time. And it takes like millions of these chuckles.” —Negin Farsad

11.“If you’re trying to take on the dominant culture, your job is to really address white people.” —Negin Farsad

12.“But news stories don’t form the picture. They only give us license to feel some kind of political and economic superiority.” —Negin Farsad

13.“The point of the movie is just to show Muslims in a positive light, to build a bridge with mainstream Americans. Muslim-Americans can be super-hilarious and that’s kind of just what we want to show people.” —Negin Farsad

14.“The outlines of a responsibility began to take hold: I have to talk about them like they’re people, not news stories.” —Negin Farsad 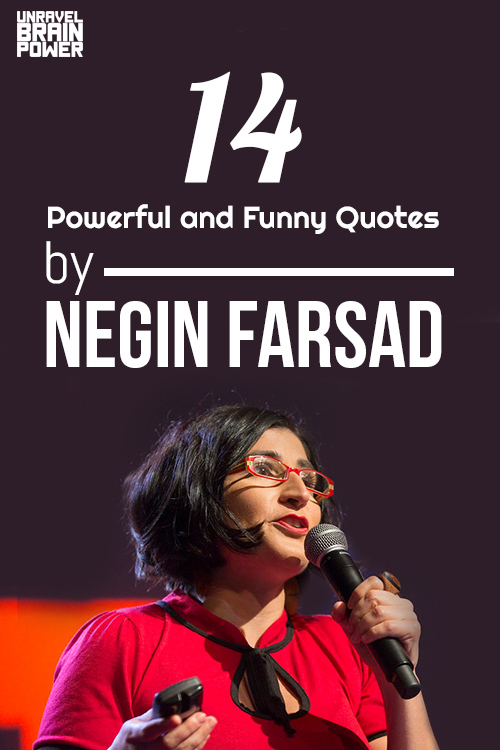