As a Marvel fan. we collected some of the best quotes from the Marvel movies for all the Marvel universe fans.

Here are Quotes From Marvel Movies

1. “Be careful. Look out for each other. This is the fight of our lives…and we’re going to win. Whatever it takes.” –Steve Rogers, Avengers: Endgame

2. “Compromise where you can. Where you can’t, don’t. Even if everyone is telling you that something wrong is something right. Even if the whole world is telling you to move, it is your duty to plant yourself like a tree, look them in the eye, and say ‘No, you move.’” -Sharon Carter, Captain America: Civil War

3. “The price of freedom is high. It always has been. And it’s a price I’m willing to pay. And if I’m the only one, then so be it. But I’m willing to bet I’m not.” -Steve Rogers, Captain America: The Winter Soldier

5. “Just because something works, doesn’t mean it can’t be improved.” -Shuri, Black Panther

6. “’Cause if we can’t protect the Earth, you can be damn sure we’ll avenge it.” -Tony Stark, The Avengers

7. “No amount of money ever bought a second of time.” -Tony Stark, Avengers: Endgame

9. “I had my eyes opened. I came to realize that I had more to offer this world than just making things that blow up.” -Tony Stark, Iron Man

10. “And you think life takes more than it gives, but not today. Today it’s giving us something. It is giving us a chance.” -Peter Quill, Guardians of the Galaxy

11. “I have lived most of my life surrounded by enemies. I will be grateful to die among my friends.” -Gamora, Guardians of the Galaxy

13. “It’s not enough to be against something. You have to be for something better.” -Tony Stark, Captain America: Civil War

14. “But a thing isn’t beautiful because it lasts. It’s a privilege to be among them.” -Vision, Avengers: Age of Ultron

15. “But in times of crisis the wise build bridges, while the foolish build barriers. We must find a way to look after one another, as if we were one single tribe.” -T’Challa, Black Panther

16. “I choose to run towards my problems, and not away from them. Because that’s what heroes do.” -Thor, Thor: Ragnarok

17. “The world has changed and none of us can go back. All we can do is our best, and sometimes the best that we can do is to start over.” -Peggy Carter, Captain America: The Winter Soldier

18. “This is why you were chosen. Because a strong man, who has known power all his life, will lose respect for that power. But a weak man knows the value of strength and knows compassion.” -Dr. Abraham Erskine, Captain America: The First Avenger

19. “Everyone fails at who they’re supposed to be, Thor. The measure of a person, of a hero, is how well they succeed at being who they are.” -Frigga, Avengers: Endgame

20. “My armour was never a distraction or a hobby, it was a cocoon, and now I’m a changed man. You can take away my house, all my tricks and toys, but one thing you can’t take away—I am Iron Man.” -Tony Stark, Iron Man 3

22. “I can’t control their fear. Only my own.” -Wanda Maximoff, Captain America, Civil War

23. “I have nothing to prove to you.” -Carol Danvers, Captain Marvel

25. “No man can win every battle, but no man should fall without a struggle.” –Peter Parker, Spider-Man: Homecoming

Share these Marvel quotes with your friends and family who also love marvel movies and superheroes. 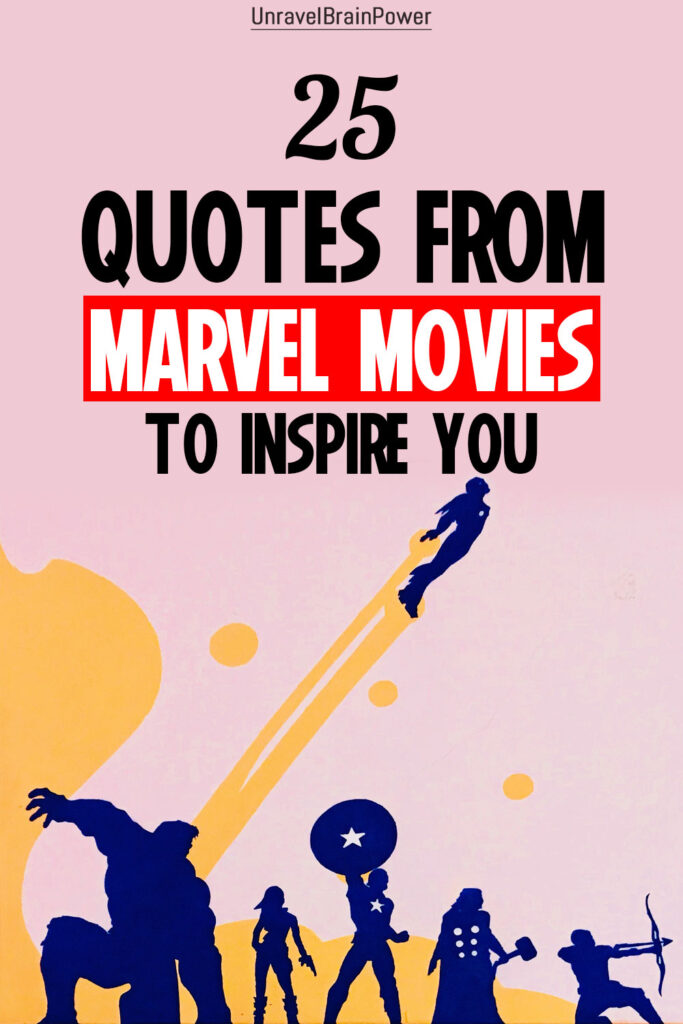