The real fact is that no human is unfailingly kind, thoughtful, and respectful all the time!

It’s been always there!

There have always been and there will always be mean, rude, and disrespectful people in this world. Even Greek philosophers have complained of the problem 2000 years ago – Plato famously declaimed about the disrespectful behavior of youths.

Usually, it’s up to the measured and reasonable individuals to tolerate what we view as unacceptable behavior or to respond (better or worse) in whatever way it seems right in any circumstance.

For instance- When I’m feeling generous, I will try to imagine the person who has just rebuked unnecessarily at me, or has irritated me by trying my patience as a toddler or a child. I will wonder what stimuli they must have experienced to turn them into aggressive and unpleasant adults who seem to know nothing about good manners.

Rudeness is seriously on the rise.

Displacement of anger and agitation from one person to another is a very common and relevant issue nowadays and as a result of this the cycle of rudeness marches onwards.

What are the possible causes of rudeness? Why people are rude

Stress and Frustration are clear factors of rudeness in modern day life, there are many causes for people becoming rude, disrespectful, and inconsiderate.

Let’s have a close look at other 7 possible reasons why most people are rude and inconsiderate of others.

A careful inspection of many rude individuals behviour reveal that they have low self-confidence, are deeply insecure, and lack the understanding of human behavior.

“How people treat others is a direct reflection of how they feel about themselves” i.e. if a person regards herself/himself in a negative light constantly, that attitude will invariably affect the way they regard others.

People with low self-esteem will often mask their own insecurities by being rude and discourteous, making an attempt to feel strong.

No one in this world is stress free. Stress can be related to personal life, work and various other factors. So, no matter how well we think we’re handling stress, at times our frustrations and anger make us thrash someone verbally in situations we’d otherwise behave quite normally. It should be kept in mind that we are the ones who are being rude or mean.

Hence, when we’re stressed out it’s easy for us to act before thinking and say or do things which sound impolite and rude.

That’s a good thing to remember when you feel offended by someone else’s rude behavior. You never know what exactly is going on in others’ lives at that particular time.

Value systems of families and upbringings are never the same for any two individuals. For example- if you were brought up in a home where using harsh words in normal conversations was the norm and it was natural to throw objects around in rage, you’d perhaps view this as an acceptable behavior, won’t you?

This of course can and does get way worse than that. People living in such hostile environment have internalized that behaviour and, as a result whenever they feel ignited they respond accordingly to others.

Unfortunately these people have observed and learned the ‘rude behaviour’ and do not know any better way out to handle frustration and stress in their lives.

The negative and anger-ridden childhood experiences those described above can lead to the development of personality disorders. For instance- people diagnosed with Borderline Personality Disorder and Narcissistic Personality Disorder often appears rude or inconsiderate due to their lack of empathy and a tendency to disregard others’ feelings.

There are several different cultures followed across the world. Quite naturally then, what’s thought to be rude and unacceptable behavior in one culture might be encouraged in another, isn’t it?

Every country has its own set of values and etiquettes which they strongly abide to. Therefore the definition and meaning of the so called ‘rude and unacceptable’ varies across cultures and countries too.

6. Technology Overload; a major cause of Brain strain-

The rapid rise of digital data and technology has led to an exponential increase in the pace of life. Yes, definitely the world is advancing but these advancements in turn is building up nothing more than stress in our lives.

Nowadays life is nothing more than a constant series of ‘demand and supply’.

Juggling mobile phones, the instigating and oh-so-hard-to-ignore demands of the social media, and online information bombardment leaves people no choice but fulfill these constant demands and give 24/7 attention.  This scenario didn’t exist even 15 years before.

This non-stop activity demanding an urgent requirement for immediate action can create ‘brain strain’ leading to anxiety and stress leading its way to aggravation of aggressive behavior.

There are some people, who, for whatever reason, might not be that emotionally mature and perhaps they will never be one.

They are basically emotionally immature. When they behave in a way that hurts others, they do so, because they lack the awareness to consider the impact of their behavior on others.

Since, they fail to comprehend their behavior as rude and hurtful, they find no reason not to engage in it. Sadly, their conscience does not prick them and stop them from acting in such ways.

How do you deal with rude people?

Facing rude people in every day encounters with others is not an isolated incident. It is necessary to not let their rudeness affect our lives. 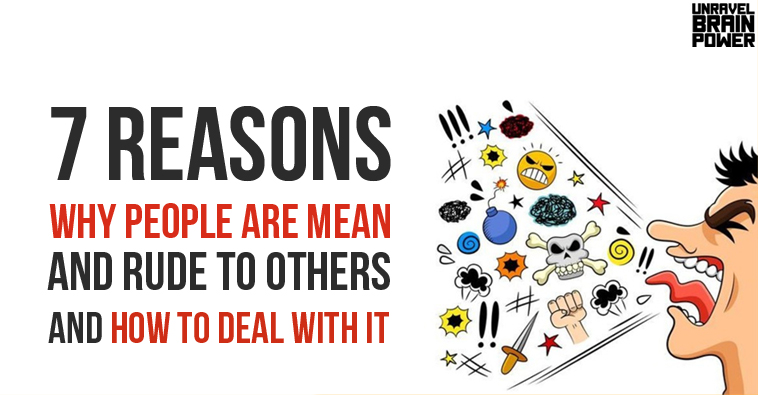 1. Trying to develop a Rudeness Filter-

Try to remind yourself that there may be so much more than just rudeness going on; thereby diverting your focus of attention to other things and filter out your instinctive response.

There will never be a lack of trigger for the behaviour you consider to be rude and inappropriate. So, whatever the reason behind someone’s behavior, the fact is that- you have no control over the circumstances underlying those actions.

The only thing you can control here is how you respond to it.

It’s very easy for us to get upset by rude behaviour, especially if they’re personal.

Here if you choose to view and treat those acts as their problem and not yours, you will start regarding it as powerless.

Always remember that you have a choice in the way you react and responding with a tit-for-tat is rarely the best response!

3. Finding out the Reason –

You must take some time to find out what had actually triggered the rudeness. Perhaps someone might have been going through their bad days (suffering a lot because of that) and they’re so distressed that manners squeezed out of the equation.

Quite possibly then, they won’t even realize that they’ve been rude to you. You won’t know until you ask and find out, would you?

One should try to control his/her instinctive response and stop reciprocating. A tit-for-tat cannot be a solution for every problem you face and it isn’t going to help you anyway. Hence, removing yourself from the challenging situation is the most effective way to avoid being on the forefront and instigating more rude behavior from the same person.

Just walk away. You have nothing to lose if they’re a stranger, since you’ll never meet them again and if they’re a friend or colleague, they’ll soon get the message that being rude to you is baseless and they will gain nothing (and maybe that will provoke them to be nicer next time to see you).

Either way, you retain the moral high ground- inner peace is what we should seek every time above anything else in this world!

5. Think over the Cultural Differences –

It will be a silly act, if you assume that the person who has just irritated you with their insulting behavior shares your cultural norms.

Realizing that they are just doing what comes naturally to them, no matter how much it enrages you, it will become easier for you to bear the behavior. It might be that you too are unknowingly annoying to the people from culture in a similar way.

Even though it’s counterintuitive, one of the best ways to defuse rudeness bomb is to stay helpful. This gives the other person a chance to check themselves, calm down and readjust their behavior.

7. Do not preserve the Spiral of Rudeness –

You must never let the other person’s inconsiderate and rude actions/words spoil your day! It’s of no use to continue the cycle and displace your agitation on others; it will only wear you out, that’s it.

It’s worth remembering that a person’s problems is not your responsibility, so instead take a deep breath and face the day with a smile. A smile can change your day and most importantly you deserve to be happy.

Dealing with rude and mean people requires immense empathy and patience. This may sound like a responsibility to us. Responding rudely and give these people another good reason in the future for a combat can never be a solution to this problem as already discussed.

Humankind can only exist harmoniously on our ever more crowded home planet if a majority of us treat each other with kindness, respect, and empathy.

BE HUMANKIND! BE THE CHANGE AND ENLIGHTEN OTHERS.

Tips on How to Deal With Passive Aggressive People 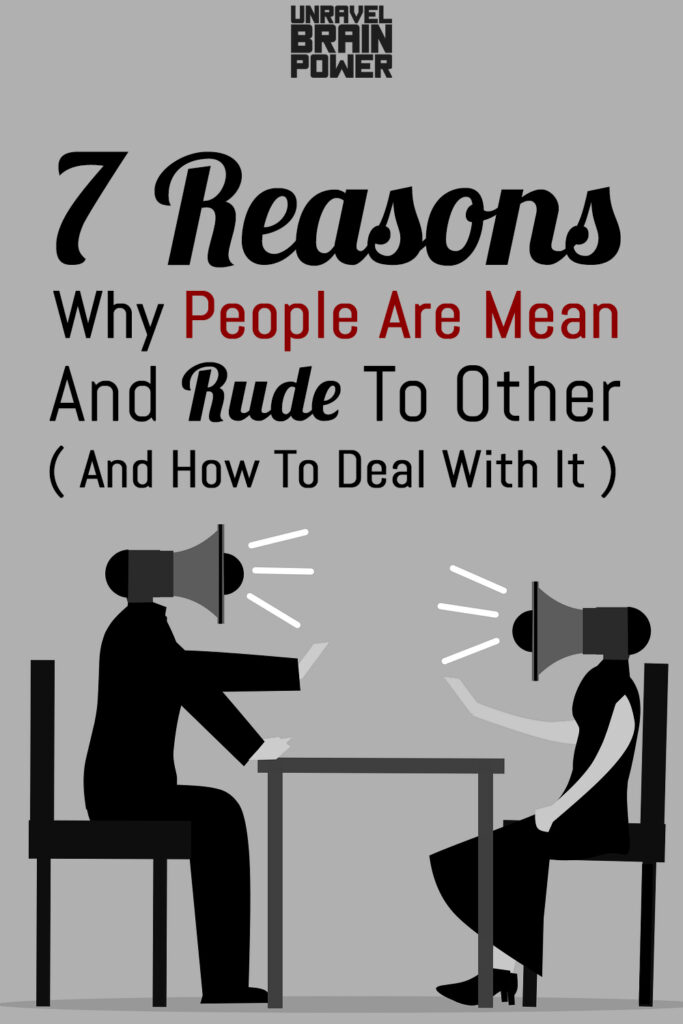 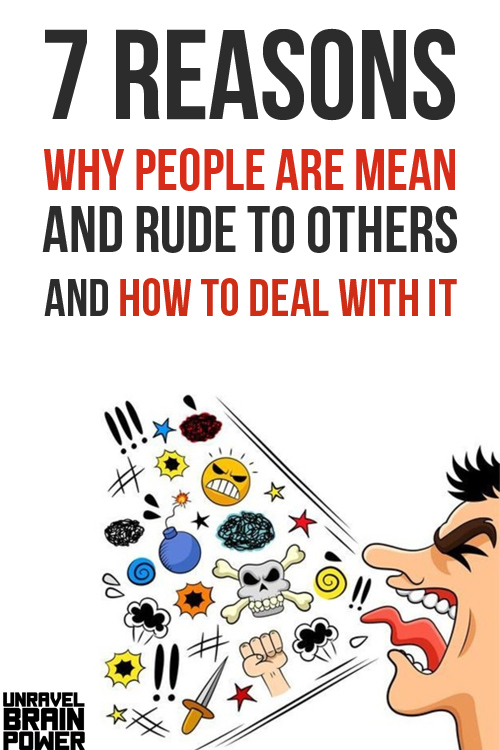