We all know about the common traits shared by empaths. Lets look at some of their most admirable qualities.

You think paranormal is just about ghosts and spirits? Disagree! There are beliefs that we are gifted with emotional abilities we hardly recognize and being an empath is one of them.

An empath is not like everyone of us. They are indeed human with superpowers.These are people who possesses the ability to easily connect emotionally to other people and feel them, understand them.

It is necessary to keep in mind that an empath is not just a person who has the virtuous quality to empathize with another person. Empathy is just a complimentary quality that comes with being an empath. In fact, according to Daniel Goleman, empathy is one of the important components of emotional intelligence, including self-awareness, self-regulation, motivation and social skills.

Sadly, we Homo-Sapiens have failed to discover the voice of an empath within ourselves because of the rat race we are blindly following. We have lost the ability to empathize with others, both towards human and non-human.Time has wrapped us in the illusion of life, the half of which we have lived to silence the empath in us.The reasons are not only confined to that, but also includes the way society teaches us life, where too much attention is given to emotional detachment, to pursuing and achieving goals and social media creating a disconnection with our inner world.

Thankfully, some people still stay connected to their inner world but often some of them struggle to make sense of the qualities they have as an empath.

If you often find yourself enquiring others if they are also “deep feelers” like you, you might need to know these traits of an empath to find if you can relate to them.

Following are the 7 central traits of an empath, to help you know more about them, feel blessed to have them around you:

1. Sensible and not just sensitive.

An empath has the ability to deeply connect with other people and take their energy vibes. They understand one’s situation and act according to it. Don’t you think that’s sensible enough to feel someone else’s actions and not giving a reaction to it or only responding if the situation demands it?

They quickly sense the environment around them and are able to sense and adapt to the slightest changes. They are non-respondent only when they have highly toxic and manipulative people around them. They are not insensitive but choose to walk away from an space filled with negativity, disharmony and anything that creates an uncomfortable state to them, further destroying their mental health.

2. Social and not always introverted.

Not all empaths are introverts and not all extroverts are narcissists!

Empaths are great with social interactions and have the ability to mingle around with people of different mental set. They are socially active even though their social circle may not have huge number of members.

They are more comfortable interacting with sober-spirited, genuinely kind people. They are emotionally expressive and are great receptors of other’s emotions and hence can easily decode other people’s emotional experiences as closely as if their own. That’s why people often believe they can read mind! But what they really do is absorb the emotions around them to experience it within themselves.

Being an introvert is genetic and they can be shy too, but an empath is the one who is aware of the emotions around them. They are more verbal and interactive while socializing. Communication is a tool for them to connect with other people at a depth which most fail to reach.

3. Selfless and not Selfish.

Isn’t it a bliss, in the world full of mean and selfish people, there are the kinds like empaths who still exist?

They completely devote their time and selflessly love everyone they are with and are the best as care-givers and nurturers. An empath, often ignores their own needs and choices to show concern towards other well-beings. Thus, they are naturally giving, spiritually open and are great listeners.

They are also a natural healer, helping without expecting anything in return, silently following their duties and sharing responsibilities. They are happily trying to ease and comfort others who are in pain around them.

Empaths are usually tending to offer energy, passion, inspiration, motivation, respect, compromise while failing to stand up for themselves when needed, which is often degrading for themselves.

But they are wise and their wisdom lets them trust their intuitions, which further helps them foster positive relationships with others. They are skillful at making mental connections, sometimes even without letting others notice. They are quick creating bonds with love, especially when they have like-minded people around them.

Their wisdom lies in the fact that they can discover lies and deceptions too quickly, and that’s the reason why they stay away from the negative ones to carry no emotional baggage with themselves.

Isn’t that the best way to eliminate the amount of negativity from one’s life? It’s never easy to fool an empath.

5. Mentally active and not absent-minded.

There is a preconceived notion about the empaths being absent-minded, which is only a part of the story. In fact, they are mostly active because their mind is working all time. They are the dreamy kinds but not forgetful and inattentive.

Others may get confused while trying to decode an empath and their source of emotions. An Empath is constantly exploring people around them and sensing the vibes they receive and their mind is continuously commanding them to act accordingly, so empaths are super-responsive!

They actually filter the world through their intuition and intellectualize their feelings. They can smell what others are up to and can advice you to stay away from their malicious intents.

6. Peace lovers and not socially withdrawn.

Empaths create a calming effect and a peaceful environment around them.

They absolutely loath situations which are violent or drama filled. And that is why they choose to be alone mostly to avoid facing or engaging in cruel activities.

Also, spending time alone helps them scrutinize themselves and recharge themselves. They enjoy their own company more than being with overly-egotistical–double-faced people. Even though an empath quite resistant to nonsense they refuse to be surrounded by any kind of negativity which includes fights and arguments, dirty games, injustice, unnecessary confusions.

An empath, thus, is non-violent , non-aggressive and a peace-maker.

7. Emotionally strong and not self-perceived victims.

Is it easy to constantly keep absorbing other people’s energy and still survive one’s own? For Empaths, it surely is. They can be a dumping can of other’s anger, frustration, failures, disappointments, problems, and issues.

The most interesting trait of an empath is that they are capable of connecting more deeply with animals and living objects and not just human beings. Their emotional strength makes them shower more love and care for the animals too.

They are too generous and compassionate, their kindness and bigheartedness have no limits because of their emotional strength.  Also, they dig deep to understand one’s own emotional processes.

8. Alone and not lonely.

An empath may love to be alone but do not be misled by assuming they are the loneliest on earth. They are happy when they are with themselves. They know being alone works better for their mental peace and at times the cacophony of their everyday life can be too exhausting for them.

One will usually find an empath canceling movie plans, brunches with friends or a dinner date and chilling at home at their favorite corner, with a bowl of noodles and books. But they wouldn’t hate a company with the same mental wavelength.

Where to find them? There’s a high chance you could find one at the lap of nature, embracing it’s beauty.

9. Carefree and not careless.

Being an empath is a gift to one’s self. They do not set limits and boundaries to their thoughts and ideas. They do not like to be caged.  In fact, they are perpetually trying to broaden their horizon of knowledge. They do not think in conventional ways and their world view is definitely not narrowed down by shackles of societal rules.

They are not guided by the need for other people’s approval. They like to live their life based on their own rules. An empath takes care of their own freedom but not at the cost of other people’s emotions. They keep themselves away from people who are drama lovers as for them the principle is “less people, less drama”.

An empath’s trait to be carefree is often misunderstood as not being ambitious enough, or as being careless about their goals. On the good side, this makes an empath’s lifeless chaotic and suffocating.

An empath’s personality, traits and behavior is thus, always “extra” and may seem weird or different to people around them.

An empath may be extra-organized, over-thinker, over-loving, extra-glamorous, too much faithful and excessively trusting of others, too much giving, being too nice and accommodating, too much curious when it comes to gaining knowledge and expressing gratitude.

Being extra is not a bad thing, because in most cases, it means being yourself– being authentic. ‘Extra’ is a remarkably fitting word to describe an empath as they put extra effort to every task they perform.

To conclude, an empath is a person who has the capacity to absorb others’ emotions, moods and energies – their pain and joy, worries and concerns, hardships and struggles, sadness and happiness, intentions and desires and everything in between. Not to miss out, an empath is an expert in human psychology! It’s no less than a superpower to be an empath.

An empath is REAL and RARE. 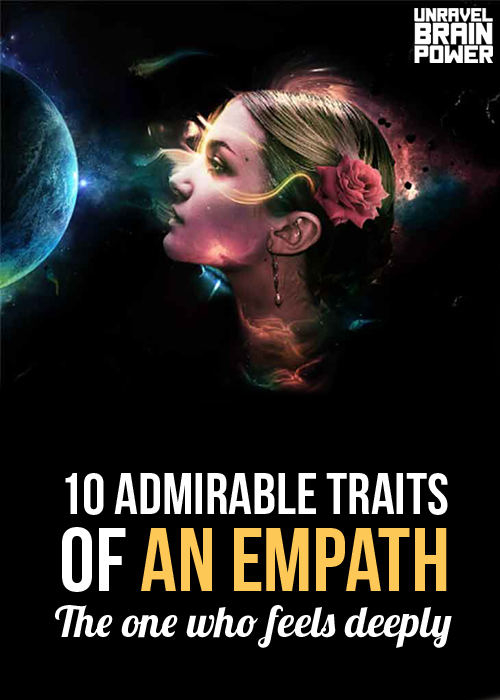