Did you fight with your partner last night? Did it become too messy at the end?
Still can’t figure what went wrong?
Researchers have found that fighting a healthy fight is productive for couples. It helps to rediscover things and clear out doubts. Even it is unnatural to not argue. As no one is perfect, our flawlessness leads to mistakes. Thus we have to deal with them cautiously.
Fighting is an important part of a relationship. But it doesn’t have to shower hatred or lessen trust between the partners.
A fight should end up in healthy conclusions with no mutual guilt feelings

We have brought to you the ways you can avoid it being nasty.

Ways to fighting fair in a relationship

You need to listen to what your partner is trying to say. In fights, we forget to listen to each other’s troubles and end up multiplying them. Spouses mess everything up by not giving them their space to talk or share. Mostly the dominant one gets to speak. Thus the problem remains unresolved.

2. Attack the issue, not each other:

Attacking each other won’t do anything well. It would only end up in mutual disgust. You need to remember, it is the problem that has to be tackled and not our characteristics. People just forget about that, when angry. Our angry minds are so much vulnerable that they could make or break things instead. To save relationships and destroy the dispute, try focussing only on the subject of anxiety.

3. Don’t get confused with the point of the conflict:

Most of us do this. Come on, you have to admit.
While arguing on one topic we jump to other ones that better fit our defense. That’s a big NO-NO from experts. Try to stay put in one subject until that’s clear.

Couples start yelling at each other without listening. Yelling leads to rising tension and distress between people. Try to avoid yelling at people. It is not a good practice in itself. Couples forget their aim and end up quarreling among themselves. The number of marriage separation cases are increasing day-by-day. Our lack of patience is directly affecting our relationships. You are being harsh with something, with which we should have been delicate.

Criticizing is a poor choice when it comes to marriage fights. We do blame others to cover up our faults. When the opposite partner does the same thing, we get hurt. When you do that, ever thought about how your partner may feel like?

6. If you are wrong, just apologize:

Apologizing works wonders. If it’s your fault then don’t hesitate to admit that. We need to take responsibility for our actions. Throwing them to our partners won’t fix things. If you are sorry for what you did just say it. The more you hide, the more tension arises.

Your behavior directly impacts your relationships. Just like yelling, being offensive, and unsympathetic, you are pushing yourself more in the darkness. One should calm down the other if such a situation arrives. If both of you start overreacting, try to set limits. Physical abuse in fights causes so much mental disbalance that is unfathomable.

You are not here to “win”. You are here to clear doubts and solve issues. Both of you are a team. Team members never put the other one down, they lift them. It’s high time you change your way of things. You can’t keep on defending yourself throughout. If love really matters to you, the relationship matters to you, you need to compromise some ends. Some ends can’t be tied ever.

Incomplete fights are as dangerous as insufficient knowledge. You need to conclude it. Or it might lead to something unwanted.

No one is perfect: Most couples get defensive in fights. In order that the other person might accuse you, you start lying at his face. Covering up mistakes is not okay when you are being partners. That’s not a real relationship, is it? Sometimes we have to lie for the sake of the person, as the truth might destroy them. Be aware of whether your lies are saving your partner from anything or just your excuse of not getting caught.

11.  Never fight when tired or exhausted:

Have you ever noticed that after returning home from the office or any other place, when our parents have a hot talk, it doesn’t take much time to peak. Our physical state directly impacts our mental condition. If you are tired or not in the mood to talk, then avoid a fight at that time. Try to spark up the conversation when both of your spirits are good and fresh.

12. Take responsibility for your words:

“A moment of patience in a moment of anger saves you a hundred moments of regret.” As the saying goes. Be silent when you think, talking, or arguing will disrupt things. Be calm and cooperate with your partner on stormy days like these. Spouses should stick together on bad days. Whatever bad words you would use, can turn against your emotional bond. So it’s advised to stay calm and resolve things sincerely.

13. Don’t hurt your partner’s feelings in solving the issue:

Rude people often do this. To stop the other from revealing the truth, they use harsh words to insult them. Rather stop them. Some people have the mentality to win by letting others down. That isn’t a partnership, rather a dictatorship.

If you love your partner and care for each other, do follow these 13 rules of fair fighting.
Let your fights do the miracle.

Read more :
6 Things To Never Say in A Relationship
Pin for later 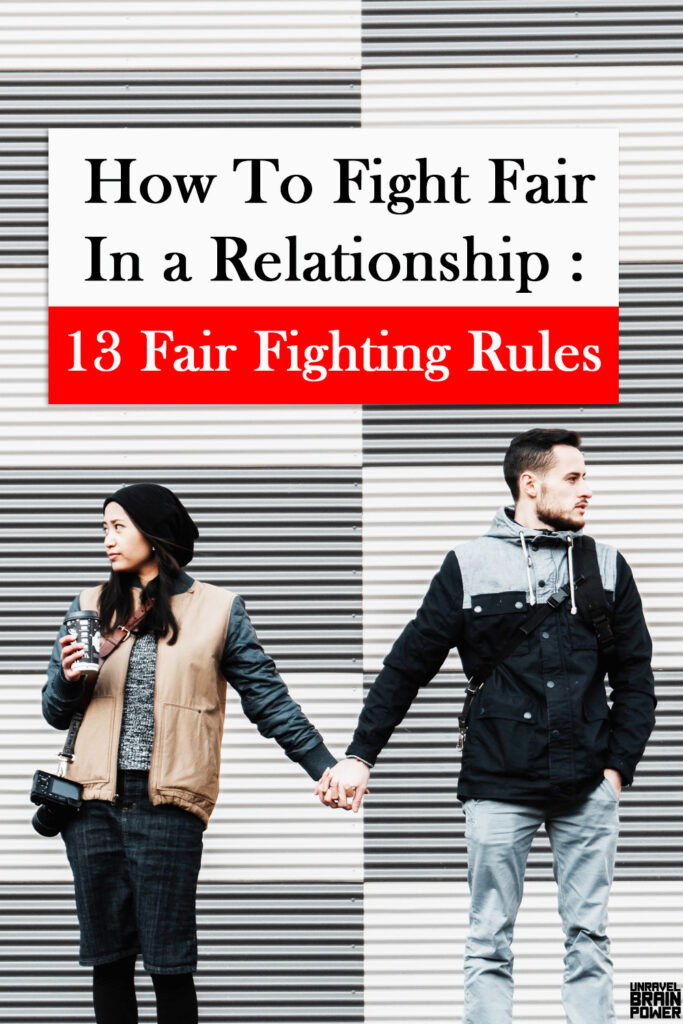