The belief that a man has to make a woman feel special is kinda backdated now.
Who doesn’t want to feel special? Who doesn’t want someone to care for him?
The feeling of being cared for is truly powerful. It can ease out anyone’s pain.
Love is the ultimate thing we are talking about.

Any successful relationship requires devotion from both sides. But if anyone fails miserably, the other should hold him up. After all, that is what life partners are for.
As most men believe in a patriarchal society, most women believe that it is the man who makes love. With a changing society, all these have become rumors. Because none of them is true.

It’s not about buying him gifts or things to make him happy. It is the little things that a woman can do to make him genuinely happy.
Always remember, materialistic possessions can only give one-time happiness, but something done passionately can last forever.

We have researched and brought to you the things that can make a man happy. Not all men are the same (the saying is wrong ), so you need to know your man first, to make it work.
We have listed the Do’s( that you should do) and the don’ts ( things that you shouldn’t) to make your man feel special and wanted.

First things first. The first and foremost need to make anyone special is loving him. You need to love and trust him, or else there’s no need of making him feel anything. Genuine love is so very important for anyone. This isn’t a one-day process. It takes a span of a lifetime to love someone truly. Some people despite living together for marriage years, fail to understand and lack trust.
Before anything falls, just ensure that you are true to your man.
Trusting plays a vital role in every relation. So make sure you trust him first.

2. Pamper him and show your possessiveness:

The next thing after loving him is, showing him and expressing your feelings in the form of cute cuddles and pampers. You should consider this to be a vital part of a relationship. Often partners even after loving each other, fail to prove themselves to the other person. This could even end in bad feelings and the feeling of not being loved.
Show your man that you are possessive towards him. Sometimes, get jealous when seen closely interacting with other girls, might be friends or colleagues. It is important for him to know how you see him, its depth, and Genuity.

The best way to make him happy and confident is by complimenting him. You should be a better half in real terms. We often fail to appreciate and praise our partner for his deeds. We feel as if it’s unnecessary and boring. But trust me, this is important. Your partner might think that you’ve taken him for granted or you don’t want to see him improving
So next time, he does something good, you should be the first to acknowledge him.

4. He should have your back:

Supporting is the biggest therapy. Time isn’t a constant thing. There will be times when everything gets topsy-turvy. If you are his real partner, he should always have your back. He should know that there is someone to support him, no matter what. Life throws us to challenges, and we have to act upon them wisely.

5. Dress yourself the way he likes, especially on dates:

Most men prefer their lady in a red dress when it comes to dates. If your man is too into that, wear something in red or the color he likes. It would give your man the feeling that you want his attention and love to dress the way he wants you to.

Some of us often fail to see what our partner truly desires. Sometimes we get too busy and sometimes don’t want to style ourselves that way. But sometimes looks are important. Otherwise, the ‘’love at first sight’’ concept wouldn’t exist. Would it?

6. Give him proper space:

Other than always probing into his business, try considering him some space. Spacing allows relationships to grow freely. If you try to linger into his mind and keep a check on him always, he would end up feeling that you lack trust in him and has become a burden in the relationship. Get to the ways to know your partner. Understand deeply what he wants. Why is he unnecessarily being rude to you at times? Or is it you not giving him proper space?

7. Take guidance from him:

Asking your partner for advice and guidance from time to time will make him feel wanted. When we love a person, we want to make a mark in their life. Your boy might feel that way too. It is your responsibility to give him his way. Taking his aids and asking him for help would make him a sense of responsibility towards you. Don’t ask for anything weird.
Go for life decisions and things that are difficult, because guys love to solve puzzles!

8. Confront him with your feelings:

The best you to make your man know that he matters to you is by assuring him that you love him, miss him so bad when he isn’t around you. In our busy schedules, often we forget to say that we care. Relationships are hard to commit. It takes time and energy to keep up with your promises. With time the love for each other changes. Yeah, change is a part of life, but the people whom we love, should we change towards them? A BIG NO. Other than waiting for him, just hug him and say “I love you.”

Arrange birthdays, dates, and get-togethers, as he does for you. Why does it have to be the man always doing these things? Why can’t the woman do this?
Like you expect your partner to surprise you, your mate might be thinking of it too. He isn’t God. He too has expectations. He would never ask you for any surprises. But still, they do have such desires. It’s your duty to fulfill that.

Ego kills. If you are an egoistic one, then do not show such an attitude to your man. He might not like it at all. Rather it would mess things up.

2. Don’t insult him, rather correct him:

Other than pointing out his flaws, try fixing them. Because that’s what partners do. If you are the dominating one, you should have this edge over him. Without insulting or hurting him by words, try to be polite and respectful when discussing flaws.

3. Don’t force him over anything:

Do Not burden him up with things that he really doesn’t enjoy. Maybe at first, he won’t say a thing, but slowly his temper would change. You can’t force anyone for anything.
You are his companion. You should know what he hates the most.
Rather than pushing his buttons, you should ask him for things. Take his consent before you take steps.

I hope the suggestions will help your man to feel special and lovable. If you think of other things that might work, do write to us in the comments.

Read more : 10 Key Things That Men Would Do In a Relationship 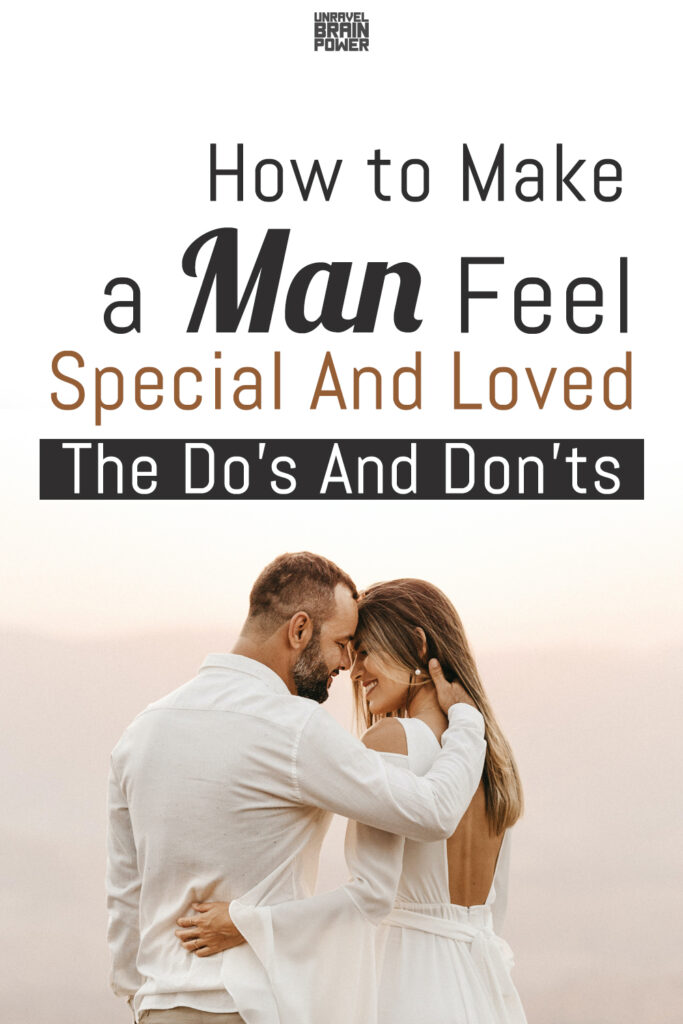