We come across many individuals in our day-to-day lives who are compulsive or pathological liars. There are numerous ways to deceive other people, and lying can be considered to be just one among these ways. People who are strangers in most cases, lie within minutes of meeting each other, and an average human being hears between ten to two hundred lies on a daily basis!
(The above information is derived from Liespotting: Proven Techniques to Detect Deception authored by Pamela Meyer). There can be several signs that are indicative of a person lying – these include fleeting microexpressions, forced laughter or fake smiles (same goes for completely fake crocodile tears), body language, or gestures that are contradictory to each other, shifts in the blinking rates, and many more.

Liars, however good they may be at lying, exhibit certain symptoms that prove the fact that they are lying, in the first place. The most common qualifying phrases that are more often than not, overused by liars in order to start a sentence include, “To tell you the truth”, “Actually”, or “Honestly”. They often refer to themselves in the third person and avoid referring to themselves directly, in the first person. Even while saying or agreeing to things in the affirmative, they might have this annoying habit of constantly shaking their heads to and fro. Their facial expressions might even be indicative of the fact that they are having a contemptuous attitude towards the people whom they are deceiving, by lying to them about certain matters. They may even try out the way of faking crocodile tears in order to gain the sympathy of the person to whom they are lying.

One of the key indicators of someone lying is that they will dress up their lie in a concoction of unwarranted, unnecessary details in order to make the lie sound true and valid.

What is the aftermath when you do find out that they have been lying to you, in fact lying on your faces? What happens when you find out what actually has been happening when you find out the truth? When you do find out that you have been lied to, and confront the individual who has lied to you or has been lying to you all this while, you can expect them to react aggressively, and project the entire matter onto you, putting themselves into a victim stance. They might also react in a defensive manner, and may jot out a lot of extra unnecessary details in order to avoid the intervention and diverge from the topic in the first place. They might also avoid the entire question and act as nothing has happened. This is also a pretty common occurrence found among people who are compulsive liars.

The big question still remains: In spite of all the complications that lying brings, why do people choose to lie in the first place? What is the reason for people lying?

We bring you the answers here. Read on:

1. To protect their own image:

These may not be lies that are made up in an exaggerated way, rather small, white lies that preserve and protect an individual’s self-image. These can be lies regarding an employee’s past criminal record which they do not ever want to discuss at their workplace, or an actor/actress’ abstaining from issues that involve their personal life. All of this is done to maintain a certain purity and sanctity that is associated with an individual’s self-image.

Compulsive liars are often those people who have personality and mental health disorders such as bipolar disorder, or multiple personality disorders. In cases like these, the person who is lying is often unaware of the fact that they are lying in the first place, on account of their mental condition. It would be unfair to blame an individual in situations like these because their mental health is not right, they are not in the correct frame of mind.

3. To save a relationship:

4. To not hurt someone’s feelings:

When some truths are harsh enough to break someone’s heart or hurt someone’s feelings, more often than not, the person on the opposite end finds themselves trapped, not knowing whether to reveal the ugly truth or lie in order to protect their feelings.

Bragging about certain achievements of theirs might be the habits of some individuals, but have you ever bothered to check whether all of these achievements are real enough? Many a time, people who boast about everything that they have managed to do/achieve so far are often found to be pathological liars who are simply interested in impressing the person at the opposite end, and that’s about it.

6. To achieve something/ get a reward:

Numerous people lie to make a good impression at job interviews or reality shows or contests, just to get that extra edge, which improves their chances of getting the job, or the winner’s trophy – it makes them get close enough to what they actually seek or desire.

To conclude, we come across several people in our daily lives who are compulsive liars. Their lies may either be spotted or not – either way, they all have their reasons to lie. So, like it or not, we have to live with liars! We hope this article provided you with some insight into why people who lie, do it in the first place.

7 Things To Keep In Mind Before Taking Anything Personally

10 Reasons why Being Too Nice Can Be Harmful For You

7 Ways to Deal With Arrogant People

How to Deal With a Drama Queen 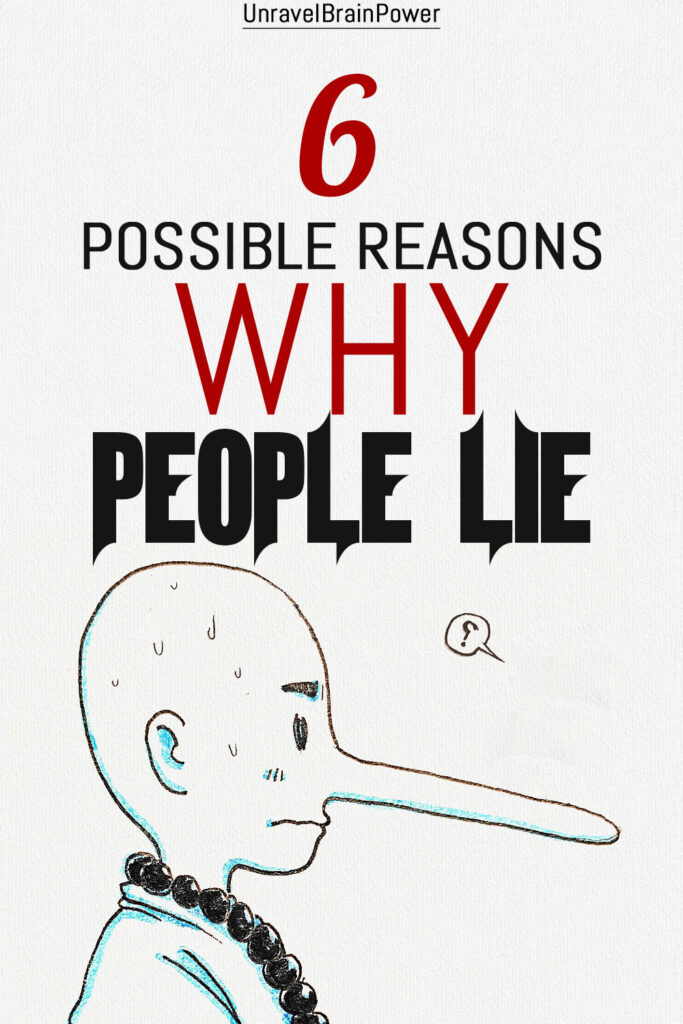