In the boys club, there are several types of friends. Mostly being annoying, they’ll keep you from drowning and holding you up, whenever anything is wrong.
The friendship among the boys has selflessness to it and it is built on the strong foundations of trust and mutual respect for each other.

Though being a girl, I have an understanding of the lads because I have so many friends that are boys, and they have their individual traits, which makes them so different from each other. From good friends to bad ones, I have them all.

The boys have this chosen family with unique traits. They would even take a bullet for him.
Every group of guy friends has some types of unique qualities. From mummy’s boy to the annoying and so on.
You just have to find which one you are.

We have come up with a list of friends that every guy has.

Types of friends every guy group has

They are the ones who are less talkative than the others, and hence the name. They are genuine about their friendship and are kind. They are good listeners and silently pay bills without fussing about it.
He might not be a jokestar but the one who definitely cracks hilarious jokes sometimes.
Not being the most expressive though, their friendship is something worthwhile.

These friends stand out from the others when it comes to help and sincerity towards friends. He strictly follows the Bro Code and is first in the line to give you back when you need it. They are loyal to you and demand a similar kind from you. They can be sometimes dominating. But it’s fun to be around them.

They are more into the dating game. They love to flirt and date any girl they see. They aren’t harmful but could be somewhat desperate to fulfill his desires. They are good as friends, but could brag about his girls anytime!.

4. The Guy With The Worst Puns:

They employ their full potential to make you laugh but fail miserably. They’ll always have jokes on their mind, some would be cringy and others truly a disaster. They are quite smart and are the brains behind last-minute plans.
Their world revolves around making bad puns and throwing them at you, maybe not intentionally. You are ought to get annoyed by their activities.

If you are a guy, you’ll definitely relate to these.

They have a strict no girls policy and stay resort to every way to stick to it. They do not have any friends that are girls and even sometimes sound like an alien.
They are good as friends and are willing to do anything for his brothers. Though having an anti-girl policy, they are never disrespectful towards them.

They have attention issues with their girlfriends! If you are a football fan, you will just love them. They live, sleep, and breathe football. He is the one who is the best football fan you will ever know. And, when they’re not watching a match, they’re probably busy playing FIFA.

Just the opposite of number 4. They have the best sense of humor and crack jokes that will keep you laughing till your eyes start pouring. He loves to amuse his friends and sometimes be the joker in order to present his joke more likely.
He will make you laugh in your bad times and use their humorous nature in solving his friends’ worries. He will laugh at your jokes too.
The kind of good friend you can definitely rely upon.

The most sensitive and sentimental one from the group. You might have a friend like this. They have the biggest heart and are a total sweetheart. They’ll touch your heart with their actions.
Everyone loves him for his behavior and kind nature. But he too gets sentimental sometimes and is the poor jokes decoder. Who doesn’t want such a good friend in the group, isn’t it?

They are one of our oldest friends, who chose different paths at a point and do not take responsibility for their pals. Do not ever talk to them about their bad past experiences and any negative things. They will rather speak of their condition when drunk. They have a negative vibe around them, which you can feel by their presence.

They are the kind of friend everyone can relate to at some point in time. They love to be happily single and are glad about it. They love partying and hanging out with friends. He’ll help you when you are in need, but never take regular responsibility of their own. They love to get drunk and dance to their last breath.
They have a positive vibe and are full of potential. They have a high goal to achieve and work hard for that.

Apart from the above-mentioned variety of friends, which I have, there are many other kinds, you might spot. Like, ambitious, selfish, the bad dancer, the liar, the gamer, the Romeo, the judgemental and the list goes on.

No matter what kind of friend(s) you have, it’s important that you have them.
Friendship and friends are too important to live. The bad and the good, every one should matter.
So here is the list of friends every guy group has.
If you are a guy too, which one is you? 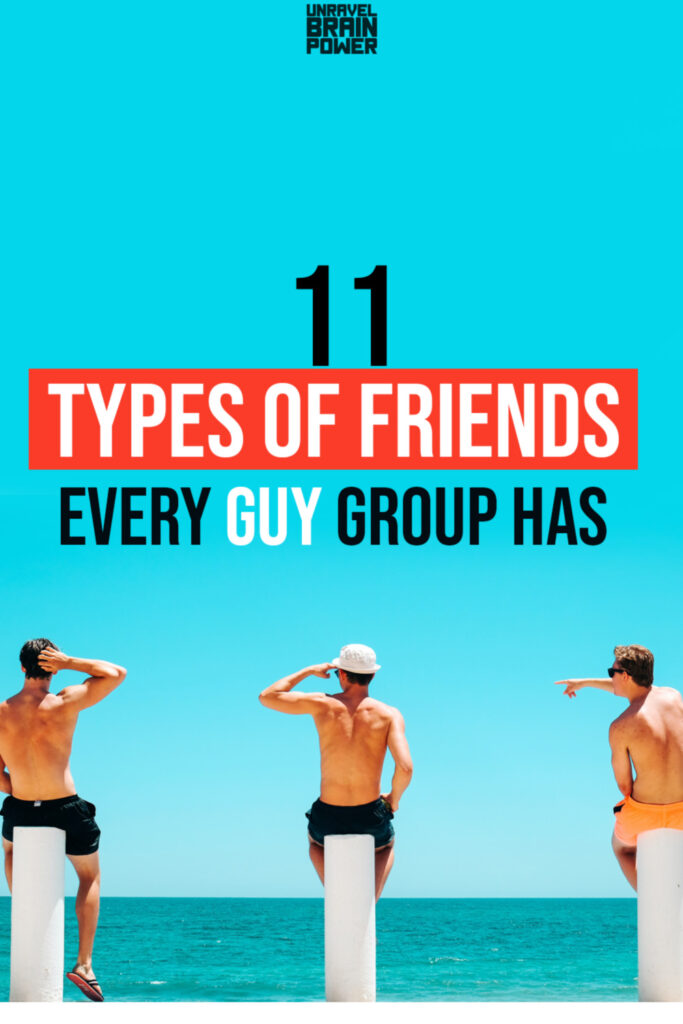