Often we have this misconception. Fake people are called fake because they pretend everything, and that includes friendship too.

Too much negativity! Let’s talk about something good.

The world is beautiful when good people live in it. They make it worthy of living. They make our lives meaningful.
Science proves that friendship can be magical, but only when it creates a positive impact. Good friendship, rather good friends helps us maintain good health, cope with stress, and have a good life.
However, if we have the wrong sort of friends, the effect becomes negative.
Slowly we get engulfed in the toxic relationship, which eats away the positivity within us.

We have brought to you, the ways you can identify whether the person with whom you are spending so much time, or trying to believe, is fake or real.

1. They will use you when they need you:

Most of us have come across such friends at least once. Haven’t we?
They will be only around you when they know you will be of help. After they have taken the favor, you would never see it before another crisis falls on them and tries to take advantage of you.
These people are like parasites. They will feed on you, and still destroy you in the end. Stay away from such friends.

Whenever they get the chance of blaming you for nothing or putting you down, they’ll do it without hesitation. They might try to defame you to satisfy their enviousness.

3. You’ll become their greatest enemy when you speak the truth:

This is the best experiment you can do to test your friend’s Genuity. A real friend will apologize or give proper explanations for their actions. Whereas, the fake one will talk harsh and mean things about you, maybe on your face or in your back.
Their true self just pops out under such circumstances.

4. They vanish when you need them:

In times when you need the person, you would never find them around you. They will ponder around you only when their needs arise.

5. Will fish you for information:

If you know something, some information that could be of their advantage, you will find fake people around you. Some people just meet and start talking so many things about us. It might not be their frank nature, instead, they might be trying to dig out some sources from you. Be cautious not to share personal or financial information with any person who is too sweet to handle.

6. They never fight for you:

There will be times when you will be down. We all face such situations. Fake friends will never give you their back. Their narcissistic nature allows them to find comfort in other’s troubles. Some fake friends won’t support you in the fear of getting involved in trouble.

7. They know you on a surface level:

Fake friends neither know who you are nor do they have any interests. Some people around us are just like our skin. They would never understand you or try to. They don’t care much about the person you are.

8. They mostly talk about themselves:

9. They lie and broadcast falsehoods about you:

If spreading rumors about you comes under an advantage, the fake friends do that. To spice up conversations or to defame you, they will spread bad things and might end up playing a savior to others.

10. They resent your progress or peace:

When they find you at peace or growing, they don’t take it the way a real friend would take. As they are envious of you, they hate that you are evolving and will find ways to discourage you. They will act nicely with you, but within, they are just not pleased that you are getting successful.

11. Will judge your mistakes and failures harshly:

We are not God. We too do mistakes. But when we have fake friends around us, they will be judgmental towards us and use it to their advantage.
Ever thought about why some of your friends are different when you make mistakes?

If you can spot a fake friend, do not trust them. I repeat, do not trust them with anything. Sharing your things with such people will only make you vulnerable to their boon. They might use that data to your disadvantage and make you the villain, or cause you pain.
Be careful when you deal with such friends.

To fulfill their selfish motives, fake friends will try to shape and manipulate you according to their needs. It becomes easier for them to set traps for you to fall. They will try to explain many nice things, but do not get into their play.

14. They exclude you from everything:

Whenever there is a party or a gathering of friends, you would never get an invitation or call to join friends. Fake friends do not want you to introduce you to others, in the thought that you might get more fame. They have typical negativity inside of them. They can’t think of good.

Promises are hard to keep. A true friend does their best to hold onto promises because you matter to them. But the fake ones don’t bother about friendships or relationships because nothing emotional is of value to them.
They only know how to infect others and maintain their profile amongst others.

Fake friends are not friends, as you see. Try to exclude and avoid them from your friend circle. They would never understand their flaws and will do whatever it takes to just fake.
Hope the above signs can help you spot them.
Choose a real friend. 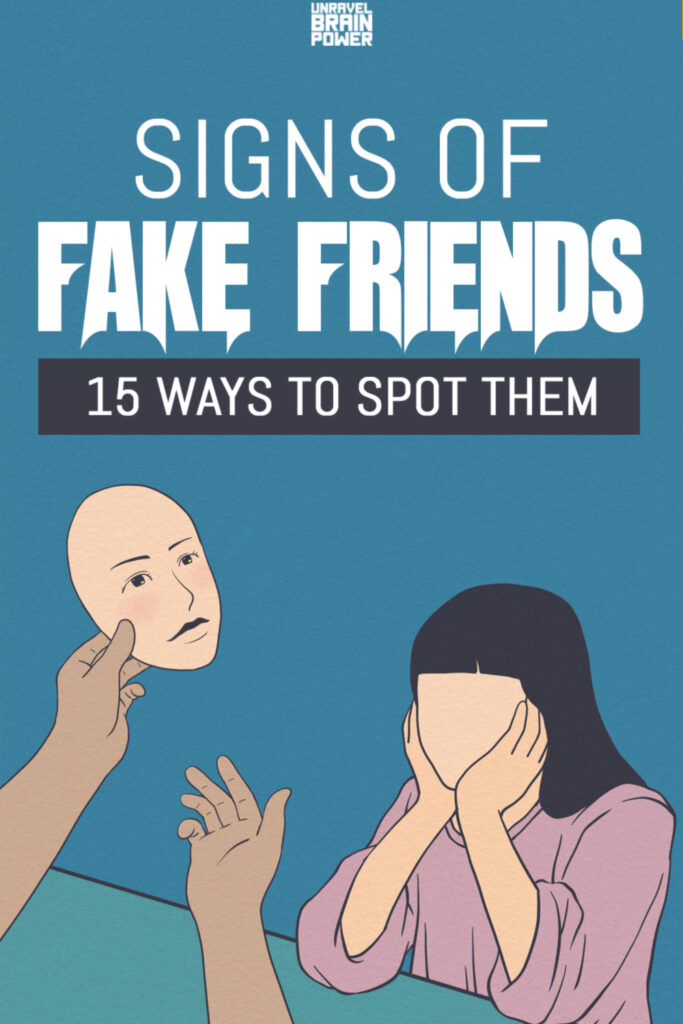