We have collected some quotes that will help you to celebrate Halloween on the 31st of October.

1. Halloween shadows played upon the walls of the houses. In the sky the Halloween moon raced in and out of the clouds. The Halloween wind was blowing, not a blasting of wind but a right-sized swelling, falling, and gushing of wind. It was a lovely and exciting night, exactly the kind of night Halloween should be.- Eleanor Estes, The Witch Family

2. Anyone could see that the wind was a special wind this night, and the darkness took on a special feel because it was All Hallows’ Eve.- Ray Bradbury, American Author

6. I heard all things in the heaven and in the earth. I heard many things in hell.- Edgar Allan Poe, The Tell-Tale Heart

7. No good deed will I do again.- Elphaba, Wicked

9. Villainy wears many masks, none so dangerous as the mask of virtue.- Ichabod Crane, Sleepy Hollow

10. There is something at work in my soul, which I do not understand.- Mary Shelley, Frankenstein

11. Fear,’ the doctor said, ‘is the relinquishment of logic, the willing relinquishing of reasonable patterns. We yield to it or we fight it, but we cannot meet it halfway.’- Shirley Jackson, The Haunting of Hill House

12. I dropped the candies into the children’s bags, thinking: You small mortals don’t realize the power of your stories.- Karen Russell, Vampires in the Lemon Grove

14. We make up horrors to help us cope with the real ones.- Stephen King, American Author

16. I would die for her. I would kill for her. Either way, what bliss.- Gomez, The Addams Family

17. Halloween is not only about putting on a costume, but it’s about finding the imagination and costume within ourselves.- Elvis Duran, Radio Show Personality

18. Halloween is an opportunity to be really creative.- Judy Gold, American Comedian

20. I was born on the night of Samhain, when the barrier between the worlds is whisper-thin and when magic, old magic, sings its heady and sweet song to anyone who cares to hear it.- Carolyn MacCullough, Once a Witch

21. It is impossible to say how first the idea entered my brain; but once conceived, it haunted me day and night.- Edgar Allan Poe, The Tell-Tale Heart

22. Everything seemed cut from soft black velvet or gold or orange velvet. Smoke panted up out of a thousand chimneys like the plumes of funeral parades. From kitchen windows drifted two pumpkin smells: gourds being cut, pies being baked.- Ray Bradbury, American Author

23. Believe nothing you hear, and only one half that you see.- Edgar Allan Poe, American Writer

24. Halloween is an ancient druidic holiday, one the Celtic peoples have celebrated for millennia. It is the crack between the last golden rays of summer and the dark of winter; the delicately balanced tweak of the year before it is given over entirely to the dark; a time for the souls of the departed to squint, to peek and perhaps to travel through the gap.- Jenny Colgan, Welcome To Rosie Hopkins’ Sweetshop Of Dreams

26. I love Halloween, and I love that feeling: the cold air, the spooky dangers lurking around the corner.- Evan Peters, American Actor

27. Nothing on Earth so beautiful as the final haul on Halloween night.- Steve Almond, American Short Story Writer

28. Every day is Halloween, isn’t it? For some of us.- Tim Burton, American Filmmaker

29. I’ve seen enough horror movies to know that any weirdo wearing a mask is never friendly.- Elizabeth, Friday the 13th

30. Halloween wraps fear in innocence, as though it were a slightly sour sweet. Let terror, then, be turned into a treat… – Nicholas Gordon, Poet 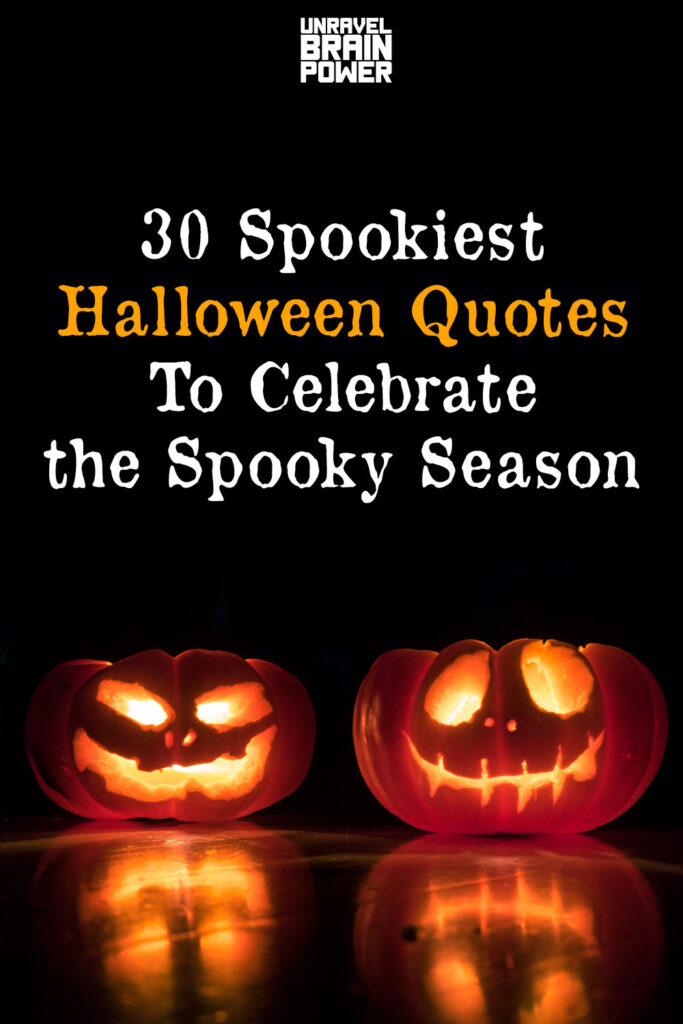